The Obama administration feared an Israeli airstrike on Iran more than it feared Iran building a nuclear weapon, and that’s why it pushed for a deal to reduce sanctions against Iran, former U.N. Ambassador John Bolton writes in The Weekly Standard. 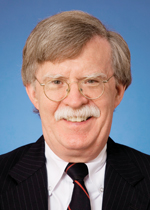 “Buying time for its own sake makes sense in some negotiating contexts, but the sub silentio objective here was to jerry-rig yet another argument to wield against Israel and its fateful decision whether or not to strike Iran,” Bolton writes. “Obama, fearing that strike more than an Iranian nuclear weapon, clearly needed greater international pressure on Jerusalem.”

Israel knows it was the target of the Geneva negotiations that produced the deal early Sunday morning in Europe, he said. Israeli Prime Minister Benjamin Netanyahu called the deal a “historic mistake.”

Israel has repeatedly maintained that Iran’s nuclear goal is to obliterate the Jewish state and has vowed to take action to prevent that from happening. An Israeli airstrike in 1981 took out a nuclear reactor in Iraq, and another in 2007 destroyed a reactor in Syria.

Netanyahu has long said Israel has the right to act in its own defense, implying it is willing to launch strikes against Iran or any other hostile nation in its region attempting to build a nuclear weapon.

“The Iranian regime is committed to Israel’s destruction, and Israel has the right to defend itself, by itself,” Netanyahu told his cabinet. “Israel won’t let Iran develop military nuclear capability.”

Iran will continue to move forward with its nuclear program in the shadows, Bolton said. If Israel waits it will be more difficult to take effective action, he warned.

An Israeli strike during the six-month deal would doubtless spark outrage, Bolton said, but it would spark the same condemnation – if not more – later. He urged the Netanyahu government to not fall prey to “the psychological warfare successfully waged so far by the ayatollahs.”

“An Israeli military strike is the only way to avoid Tehran’s otherwise inevitable march to nuclear weapons, and the proliferation that will surely follow,” he writes.

Bolton has repeatedly called on Israel to attack Iran’s nuclear facilities at least as far back as 2010.

The Geneva Deal with Iran: the Full Text

Geneva, 24 November 2013 Joint Plan of Action Preamble The goal for these negotiations is to reach a mutually-agreed long-term...