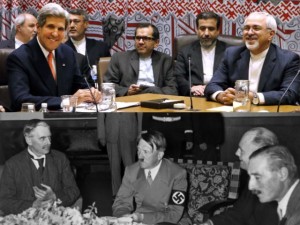 President Obama’s cowardly deal with the Iranian regime – a regime dedicated to the destruction of Israel, pursuing nuclear weapons in violation of multiple United Nations resolutions, and the persecution of Christians – marks the most ignominious moment in western foreign policy in decades. The easy comparison is to British Prime Minister Neville Chamberlain’s appeasement of Hitler in Munich in 1938, when he signed allowed Hitler to consolidate his gains in the Sudetenland on the bare promise of no further aggression in Europe.

There are indeed similarities. A war-weary west is being played by a terroristic and fascistic regime bent on regional domination. The deal buys time for further armament by the enemy regime, under the guise of international approval. The leader of the western bloc, President Obama, is being widely hailed as a master diplomat.

But in truth, the west’s appeasement of Iran is significantly worse than its appeasement of Hitler in 1938, for a variety of reasons. First, as of 1938, Hitler had not yet made clear his plans to exterminate European Jewry. He was still attempting to ship European Jews out of Europe; the Final Solution was not formally adopted until 1941. Iran has made clear its desire to wipe Israel off the map. Its current leader, supposed moderate Hassan Rouhani, has refused to acknowledge the Holocaust as historically accurate, participated in a rallycalling for Israel’s destruction, and according to Iranian press reports, stated, “The Zionist regime is a wound that has sat on the body of the Muslim world for years and needs to be removed.” Yet the Obama administration wants to pretend he is a moderate.

Second, in 1938, Great Britain was dealing from a position of military weakness. After World War I, the anti-war British public insisted on large-scale military cuts – cuts opposed by then out-of-government figure Winston Churchill – that crippled its military readiness. Chamberlain’s deal was not merely an attempt to buy off Hitler; it was an attempt to buy Britain time to re-arm. Today’s Iran deal is precisely the opposite: an American government wants to slash its military, and wants to buy the Iranians time to secretly arm. America currently deals from a position of strength, and chooses weakness. Chamberlain dealt from a position of weakness, and wanted to give his own country time to build its strength.

Third, in 1938, the Munich agreement was supported by France, the nearest military ally the British had in the region (the Anglo-Polish military alliance was not consummated until after Hitler had violated the Munich agreement by annexing the rest of Czechoslovakia). Both Israel and Saudi Arabia are militantly opposed to the western sellout of its allies in the Middle East in favor of paper promises from a lying regime.

Desperate to misdirect from his failing signature program, Obamacare, and eager to earn his diplomatic laurels in his second term to placate his ego, President Obama’s Iran solution is just a convenient piece of a larger cowardly foreign policy. President Obama’s foreign policy over the last six months has “won” America the diplomatic victory of leaving a weapons of mass destruction-using dictator in power in Syria while shifting Russia into the Middle Eastern driver’s seat and donating American stockpiles to al Qaeda. Obama has undercut the secular Egyptian military regime in favor of the fascistic Muslim Brotherhood. American power in the Middle East has been effectively minimized.

But most of all, he has successfully vented his anti-Israel malice. How else to read an administration that has repeatedly leaked Israeli national security secrets in order to stop an Israeli strike on Iranian nuclear facilities? How else to interpret an administration that has made it safer to be an anti-Israel dictator seeking nuclear weapons than a free and prosperous democracy? How else to understand an administration that insists that Israel apologize to Turkey for confronting a terrorist flotilla aimed at helping Hamas, insists that Israel building homes in its capital city of Jerusalem is more flammable than Iran building nuclear weapons, and suggests that the Israel-Palestinian issue lies at the heart of all Middle Eastern conflict?

Israel is on its own. Obama’s deal now makes clear that if Israel hits Iran, it does so at the risk of losing American support, even should Iran retaliate against Israel militarily. More than that, Obama’s deal makes clear that America will never take action against Iran under his administration, or greenlight action from others. After all, President Obama is not a man who declares that he has been duped. Just as in Syria, Obama will assume away any problems arising from his diplomatic blundering.

In 2012, Holocaust survivor Elie Wiesel told Obama at the Holocaust Museum in Washington D.C., “How is it that the Holocaust’s No. 1 denier is still a president? He who threatens to use nuclear weapons — to use nuclear weapons — to destroy the Jewish state. We must know that when evil has power, it is almost too late…Mr. President, we are here in this place of memory. Israel cannot not remember. And because it remembers, it must be strong, just to defend its own survival and its own destiny.” Obama nodded along. Clearly, those words didn’t penetrate. They didn’t penetrate because Obama did not care. He has his own agenda.

And that agenda is not anti-war. It is merely anti-Israel, and anti-American influence in the Middle East. Unfortunately, that position makes war a near-inevitability.

Back in 1938, Winston Churchill, then relegated to the opposition in Parliament, lambasted Chamberlain for the Munich deal:

We are in the presence of a disaster of the first magnitude…we have sustained a defeat without a war, the consequences of which will travel far with us along our road… we have passed an awful milestone in our history, when the whole equilibrium of Europe has been deranged, and that the terrible words have for the time being been pronounced against the Western democracies: “Thou art weighed in the balance and found wanting.” And do not suppose that this is the end. This is only the beginning of the reckoning.

On Saturday night, after the Iran deal had been announced, Secretary of State John Kerry said that opponents of the deal wanted war as a “first resort.” That was yet another Obama administration lie. Opponents of the deal recognize what Churchill did in 1938: appeasement causes war. When war isn’t even a last resort – and who, at this point, takes Obama’s threats of war remotely seriously? — it is often the first result.

J. Emilio Flores/La Opinion/Newscom It turns out notorious government contractor CGI is no stranger to glitch-filled rollouts. HealthCare.gov isn’t the...