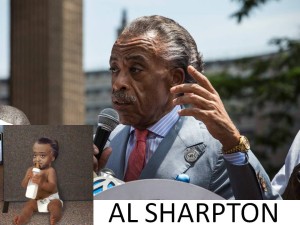 The “Reverend” is being personally subjected to the sort of wild, nonsensical hate speech for which he is so notoriously known as originating.

Unfortunately, the phony reverend finds death threats and vilification unsettling when directed at his race-baiting self.

The Rev. Al Sharpton claimed Sunday that he’s received death threats in the wake of execution-style murders of two NYPD officers in Brooklyn.

Sharpton, appearing alongside the wife and mother of Eric Garner, played a voicemail for reporters purportedly of a racist threat made against him.

“Hey n—-r, stop killing innocent people, I’m going to get you!” according to the barely audible recording.

One wonders why the Reverend does not just simply call the NYPD for help?

Remember, Reverend, just last week protestors took to the streets of New York City and demanded, “What do we want? DEAD COPS! When do we want them dead? NOW!”

Seems as though the Obama, Holder, Sharpton and de Blasio hate team got just what it wanted in the dead bodies of Officers Rafael Ramos and Wenjian Liu.

So, just dial 9-1-1, Reverend, and pray that the NYPD dispatcher is more decent and compassionate than the ill-advised protestors who demanded death to the police!

In Case You Missed It:  AZ forensic audit results show SYSTEMIC fraud, faked votes, more than 5X the margin of "victory" from just one county out of the entire state ... prepare for CRISIS THEATER distractions
Posted in Freedoms.

By Alan Caruba   The right of Israel to exist as a nation was officially recognized by the United Nations on...