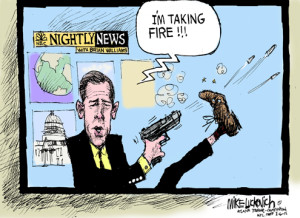 Next thing you know, we’ll find out he didn’t really come under fire in Bosnia. Or that the billing records were behind the couch. And about that cattle futures deal . . .

Wait. Am I confusing my tall-tale-tellers? Mixing up my high-profile public figures who are well-known for doing not much, and apparently feel a need to make themselves sound like they’ve had far greater adventures than they really have?

But it looks like Brian Williams’s problems may just be starting, as another one of his harrying tales is now coming under scrutiny, and not holding up too well. Williams claimed in 2006 that he looked out from his hotel window in New Orleans after Hurricane Katrina and saw a body floating in the French Quarter. Now based on everything we heard about the horror that was New Orleans after Katrina, that hardly seems implausible to most of us.

But if you were there and you actually know which parts of the city were under water and which were not, then you’d have a bit better sense of whether Williams’s story, er, holds water. So yeeeeaaaahhh . . . about that:

In a 2006 interview with former Disney CEO Michael Eisner, Williams said he witnessed a body floating in the French Quarter area of the city. “When you look out of your hotel window in the French Quarter and watch a man float by face down, when you see bodies that you last saw in Banda Aceh, Indonesia, and swore to yourself that you would never see in your country,” Williams told Eisner, who suggested in the interview that Williams emerged from former NBC News anchor Tom Brokaw’s shadow with his Katrina coverage.

Citing former city health director Brobson Lutz, the Advocate reported that the French Quarter was largely dry. “We were never wet. It was never wet,” Lutz told the Advocate.

“There were bodies in other parts (of the city), but there were no bodies in the Quarter,” Lutz told USA TODAY, adding that the only body he retrieved from the neighborhood at the time was a restaurateur who died of a heart attack.

It gets worse. Williams also claimed that he contracted dysentery. Lutz, er, doesn’t think so:

“My week, two weeks there was not helped by the fact that I accidentally ingested some of the floodwater. I became very sick with dysentery, our hotel was overrun with gangs, I was rescued in the stairwell of a five-star hotel in New Orleans by a young police officer,” he told Brokaw.

Lutz told the Advocate: “I saw a lot of people with cuts and bruises and such, but I don’t recall a single, solitary case of gastroenteritis during Katrina or in the whole month afterward.”

So whatever other problems folks in New Orleans were having, they managed to take the fairly simple, common-sense step of not ingesting floodwater and getting dysentery. With the exception of Brian Williams, if we are to believe Brian Williams.

Big picture, here’s my take on this whole thing: National news anchors are put forward as extremely important and influential people, and networks have an interest in promoting that view of them. In fact, they are people who read teleprompters. Now it’s true that Williams has a more expansive role than that as managing editor of NBC Nightly News, but the thing we see him doing every night is nothing particularly difficult or heroic. He reads news stories that other people wrote, while looking into a camera.

Why should anyone see him as important or authoritative when this is all he does? We shouldn’t. And honestly, it’s fine with me if a some camera-friendly fellow with nice hair just reads the news stories and doesn’t pretend to be the equivalent of The Most Interesting Man in the World. The information is what we need, bro, not your spine-tingling tales of adventure.

But I think a guy like Williams feels to come off as urbane, sophisticated and worldly. He knows he hasn’t really experienced trial under fire, but if he can make it sound like he did, why not? And when you start doing this, it’s not that big a step to make a habit of it. What was he really doing? Sitting in his room at the Ritz Carlton. What does he imagine himself doing? Looking at a body floating! So he didn’t really see it. So the French Quarter wasn’t even really under water. What’s the diff, right?

So should we really care that a guy like this is spewing the news every night when we can’t really believe the stuff he says? Let me tell you why both the Iraq and Katrina lies from Williams demonstrate that we should.

Most people believe that the Bush second term became mired in trouble after two things happened: 1. The Iraq War spiraled out of control. 2. The government botched the response to Hurricane Katrina. Now, at least 99 percent of Americans have never been to Iraq, and were not in New Orleans during the Katrina aftermath. They did not really see for themselves what happened. They did not have the opportunity to investigate for themselves why anything happened, or what any of it meant. 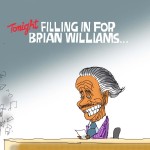 Now maybe there was truth to some of these narratives, but the point is that you and I were not there to witness it personally and we totally relied on the reporting of people like this guy to tell us how it was. And this guy can’t even be trusted to tell the truth about his own personal experiences. He embellishes or simply makes stuff up to make himself sound like more of a rugged warrior than he really is.

So why wouldn’t he manipulate his news reporting to leave other impressions that he wants you to come away with? How would you ever know? You wouldn’t unless you were there and saw for yourself what really happened, and in the case of almost every story NBC Nightly News reports, you weren’t. You just rely on what they tell you.

If I were you, I wouldn’t do that anymore.

By the way, I don’t mean to indict and entire industry, but if you’re inclined to think Brian Williams is the only high-profile celebrity teleprompter reader who exaggerates or lies to make himself sound like a more impressive person than he really is, well, you and I disagree.

by BEN SHAPIRO On Thursday, at the National Prayer Breakfast in Washington, D.C., President Obama blithely informed his audience that...