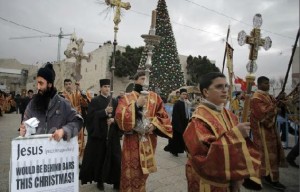 Hello ‘Offend’ a Muslim today and wish them all a very Merry Christmas and Happy New Year 2016.  I thought of doing that when I was at a red light by Marist College and saw an obviously  Muslim student on a bicycle peddling into the College gate.  I rolled the window down and yelled out “Have a Very Merry Christmas.”  Made me feel better after hearing an idiot on the radio suggesting that the US remove refugees from Yemen and bring them to the US.  I am sure Obama is planning just that.  Guess the US is going to be the waste basket for every Muslim displaced by their own civil wars. Who pays for all of this?

I bet if people read the entire 1.1 TRILLION spending bill they will find a clause whereby they will borrow money from Social Security.  BTW why is refugee resettlement now under Health and Human Services, ie Social Security?  Makes it easy to borrow from one fund to the other.

What also sickens me is the fact that education is to be provided free of charge to any refugee wanting to go to a university.  So, our own Americans take on debt for tuition with student loans while enemies of America go free.  Something if very wrong with this picture.

I am wondering if I can buy a phony Syrian passport then deck out in my Muslim regalia and head for the give w way window at a near HHS office.  For sure I won’t have to worry about the last week of the month and not having food.  I want to get me one of them there passports.

So every time a Muslim starts a civil war the US and the West gets the refugees. This is unreal.  The ones coming out on top are 1 the leftist who are in the resettlement business and 2 the Muslims who get the freebies.  The US taxpayer gets the “shaft.”

So, be polite and wish a Muslim a very Merry Christmas.    A little truth goes a long long way…

Posted in Terrorism and tagged Muslims.

If there’s one thing President Obama is a master at, it’s taking tax payer funded vacations, doing what he does...