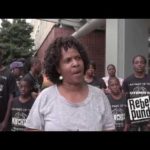 “He’s probably the the worst President ever elected.”

“Have the same love for these (black) young people as you’ve got for the ones across the border.”

These residents of Chicago understand that Obama has done nothing to help raise them out of a state of dependency. They want jobs. They want self-esteem. They want to raise their families and earn a paycheck. Obama and the Democrats want to keep them down. And when the joblessness is so out of control, and the youth living in these impoverished neighborhoods get out of control, the cops are called in. Obama and Eric Holder have managed to turn the same cops who are coming into these neighborhoods and risking their lives into Public Enemy #1. Obama has these residents living in a perpetual hell-hole with no way out. No wonder they’re so damn angry. Someone needs to get the message out to these communities that the Democrat party has no interest in helping them to break this cycle.

“The Black community needs jobs. We want them, we need them and it is a matter of life and death for us.”

“The liberal agenda is not the black agenda, it is not the family agenda and it’s not the American agenda.”

In Case You Missed It:  Chaos in Los Angeles as Violent Leftists Riot Over Roe v. Wade Being Overturned (VIDEOS)
Posted in Tyranny and tagged blacks, Chicago, Obama, Protests.

Is Obama using the White House for JIHAD? Only the Congress can protect Israel

"In violation to the Oslo Accords, Obama, France in a rush to rape Israel in the UNSC before the end...