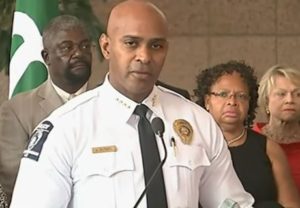 Not that there is ever a good reason to have a riot, but the Charlotte rioters might be interested to know they bought a line of crap from the media, which just sent 23 people to the hospital and unleashed hours of chaos in the streets for no reason whatsoever. White-cops-shoot-unarmed-black-man? Don’t think so.

As the video below demonstrates, the media caused all this. More than 1,000 people heard on the news that a guy holding a book was shot by police, and even though these people didn’t know the guy who was shot, they came out anyway and rioted.

And yet none of what they heard was true. A man with a gun was told by police to drop his gun, and he did not comply with that request. I hate to tell you this, but that is going to get you shot every time. Not only that, but in this case – contrary to the media’s racist-white-cops narrative, it was a black cop who felt threatened and fired his weapon, and a black police chief who backed up what his officers had to do.

So what should the media do differently? Here’s what: I understand that when an incident first occurs, it’s difficult to get all the facts straight right away, and that’s why they need to step back and stop rushing on air or into print/web with these shooting stories before they know what really happened. Look, I’ve been a reporter, and I’ve covered some cop and crime stories – although not a lot. You don’t publish or air a story when you don’t have all the facts straight, and you certainly don’t push some sort of racial narrative if you’re not sure it’s pertinent to what actually happened.

And yet that’s what the media do with every single one of these stories. Regardless of what else they don’t know, if a cop pulled the trigger and a black man was hit, they’re going live and they’re leading with the racial angle. Every. Damn. Time. And if someone – a family member, a witness, whoever – claims the man shot was unarmed, then they immediately go on air and report that. If it turns out later that this was not true, oh well. But not “oh well” for the people who were injured or killed or lost property as a result of the riot that ensued.

This is such a hot media narrative right now that they fall all over themselves to report first and ask questions later. And they cram everything into the racist-white-cops narrative whether it fits or not. No wonder the Colin Kaepernicks of the world believe the things they do. They are gullible fools who gobble up what the media feed them.

Here’s what the media’s complete irresponsibility led to in Charlotte:

We won’t embed it here, but if you really want to see some media-inspired ignorant anger, here you go. Language warning and all that. It’s more than an hour long but I think the first few minutes will tell you what you need to know.

The media’s recklessness unleashed mayhem in Charlotte, for no reason whatsoever. And these malevolent fools will pay no price for what they’ve done. Only the people who had to suffer through this chaos will be paying any price.

Don’t you find it interesting that when an obvious terrorist act occurs the media takes its sweet time before they’ll even admit it’s an act of terror, and advises us not to jump to conclusions?. And God forbid, we blame radical Islam, because it could have been a right wing malcontent…..because….well……what about Timothy McVeigh…. right?

Yet, when a black person is killed by police, and some unvetted, unfounded, rumor starts up, stating that the deceased was unarmed and non threatening, they can’t wait to run with that, and incite as much violence as possible in the black communities.

The top executives of the networks need to be dragged before Congress and told that the next time you run with a false narrative, and violence erupts because of it, your broadcasting license will be suspended for five years, and you will may be held liable for all deaths, injuries, and property damages that result from you trying to advance your political agendas rather than reporting the news accurately.

In Case You Missed It:  Aspirin found to greatly decrease covid hospitalizations
Posted in Freedoms and tagged blacks, Protests, Riots.

By Jim Clifton, Chairman and CEO at Gallup The Invisible American I've been reading a lot about a "recovering" economy....