For a clue to why California is losing its allure as a place to settle down, just ask Jennifer McCluer, who moved out of California in 2007 after she obtained her license in skin care. Unable to afford Orange County’s sky-high rents, she opted for Portland, Ore. “A big motivator was that I lived with […] 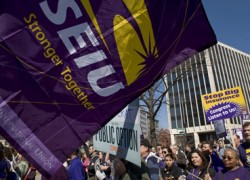 Two well-connected government unions in California are teaming with Gov. Jerry Brown to support a multibillion-dollar tax increase. The California Teachers Association and Service Employees International Union were the top two spenders for lobbying in 2011 with combined efforts totaling more than $10 million, according to Sacramento Bee. Now they’re using their muscle to champion […]

California To Run Out Of Cash By March

California will run out of cash by early March if the state does not take swift action to find $3.3 billion through payment delays and borrowing, according to a letter state Controller John Chiang sent to state lawmakers today. The announcement is surprising since lawmakers previously believed the state had enough cash to last through […]

Last week, the independent California High-Speed Rail Peer Review Group recommended that the state legislature not proceed with funding the proposed Los Angeles–San Francisco project. Its argument was grounded in concerns about “the California High-Speed Rail Authority’s plan to start construction without any assurance of future funding from the federal government,” according to The Wall […]

Willful Blindness Toward Terrorists at UCLA a Decade After 9-11

by Judith Greblya FrontPage Magazine December 23, 2011 The University of California, Los Angeles (UCLA) Center for Near Eastern Studies hosted a roundtable discussion last month titled, “After a Decade of the ‘War on Terror’: The Middle East, Human Rights and American Muslims.” Sponsored by the UCLA School of Law Critical Race Studies Program, the […]

California, An Example of Liberalism Failed

A study issued by the Public Policy Institute of California (PPIC), a non-partisan think-tank, just confirmed that during the 2009-2010 recessions, every income bracket in California lost income faster than the rest of the United States. But even more disturbing, all but the top 25% of earners now make less than equivalent income classes in […]

OAKLAND, Calif. (AP) — Occupy Wall Street protesters want to shut down ports up and down the West Coast on Monday in a bid to gum up the engines of global commerce. But organizers who are partly billing this effort as a show of solidarity with longshoremen have not won the support of the powerful […]

Can Social Protesters Survive and Thrive without Base Camps?

The Occupy Wall Street Movement was the first to set up a tent city in the heart of New York’s financial district encouraging  copycat occupations in other American and foreign cities. The authorities originally tolerated the phenomenon but neighbors’ complaints, sanitary hazards as well as a sense that the movement was running out of steam […]

To return to crazy town, restaurants in far-left out-of-this-world San Francisco, want to impose a mandatory 25% tip rate. CBS San Francisco reported: It’s a question many of us ask when we go out to a restaurant. “How much should I tip?” Whether your service is good or bad, San Francisco Restaurant workers want to implement […]

Congressman’s son lobbied for failing solar panel company by Neil W. McCabe A photovoltaic solar panel ranch similar to the California Solar Valley Ranch under construction by SunPower in the state’s San Luis Obispo County. The $1.2 billion loan guarantee to support the project was finalized in hours before the loan program expired Sept. 30. […]