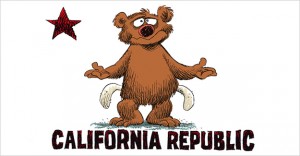 A study issued by the Public Policy Institute of California (PPIC), a non-partisan think-tank, just confirmed that during the 2009-2010 recessions, every income bracket in California lost income faster than the rest of the United States. But even more disturbing, all but the top 25% of earners now make less than equivalent income classes in other states. Once known as a job magnet for its sunny climate, world-class universities, and burgeoning high-tech opportunities, California has been transformed into a toxic anti-business state that works hard at drive businesses away.

From 2007 when the recession began through its end in 2009, family incomes across all income classes dropped by over 5%. But instead of going back up during the recovery, they continued to plummet by another 6% in 2010. The declines weren’t spread evenly across the income classes. Families with incomes in the top 10% saw their family incomes decline 5%, but the bottom 10% of California’s poorest families saw their incomes plummet by 21%.

In surveys, business executives regularly call California one of the country’s most toxic business environments and one of the least likely places to open or expand a new company. Many firms still headquartered in California consciously refuse to expand their workforce. Brutalized by the bursting of the housing bubble and currently suffering an unemployment rate of 11.7%, 3% above the national average, California family incomes continue to rapidly lose ground.

After accounting for November revenues, total year-to-date general fund revenues are now behind the budget’s estimates by $1 billion, but expenditures for the year are over projections by $1.95 billion… The combined current year cash deficit stands at $21.5 billion.

The resolve to turn California against business started with Governor Jerry Brown in 1974. Brown saw government’s job as restraining growth, limiting development, and expanding environmental regulations. In 1977, Time Magazine declared “the California of the ’60s, a mystical land of abundance and affluence, vanished sometime in the 70s.” Fifteen years later Gray Davis, Brown’s chief of staff during the 1970s, became Governor in 1999. Davis signed 33 bills that the state’s Chamber of Commerce called “job killers.” Perhaps the most devastating was a restructure of worker’s compensation, which drove an increase in payments per worker from $2.30 per $100 of payroll to $6.44; tripling the annual employment costs to business from $9 billion to $25 billion. Three years later, voters recalled Davis and elected Arnold Schwarzenegger. Unfortunately, in 2006 the “Governator” signed the Global Warming Solutions Act that critics mourn will raise electricity rates in California by another 20%.

In a 2011 poll of various California business groups, 82 percent of executives and owners said that if they weren’t already in the state, they wouldn’t consider starting up there, and 64 percent said that the main reason they stayed in California was that it was tough to relocate their particular kind of business. For several years in a row, California has ranked dead last in the Chief Executive’s poll about the business environment of states in the U.S.

Limousine liberals, rich environmentalists, union bosses, and their pet politicians that comprise much of the top 25% of income earners in California have not suffered devastating income declines in the recent recession. Responding to the Chief Executive poll, Steve Smith of the Labor Federation of California charged that it represented “little more than corporate honchos throwing around their weight to try to further strip working people of important protections that improve lives.” But for the 75% of Californians not at the top income levels; California’s anti-business environment continues to inflict real pain on the lives of workers and their families.

Blacklisted by History: The Untold Story of Senator Joe McCarthy and His Fight Against America’s Enemies

McCarthy has been so wrongly demonized by the left if this country. It is a shame that no one has...