WASHINGTON – Independents who swept Barack Obama to a historic 2008 victory broke big for Republicans on Tuesday as the GOP wrested political control from Democrats in Virginia and New Jersey, a troubling sign for the president and his party heading into an important midterm election year. 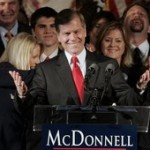 Republican Governor-elect Bob McDonnell waves to the crowd at his victory party in Richmond, Va

Conservative Republican Bob McDonnell’s victory in the Virginia governor’s race over Democrat R. Creigh Deeds and moderate Republican Chris Christie’s ouster of unpopular New Jersey Gov. Jon Corzine was a double-barreled triumph for a party looking to rebuild after being booted from power in national elections in 2006 and 2008.

Elsewhere on Tuesday, Maine voted on whether to affirm a state law that would allow same-sex couples to wed. If supporters prevail, it would mark the first time that the electorate in any state endorsed gay marriage.

And voters chose a congressmen in the GOP-held vacant 23rd Congressional District seat in New York, where Democrat Bill Owens led in the early vote count over conservative Doug Hoffman. That race highlighted fissures in the Republican Party and illustrated hurdles the GOP could face in capitalizing on any voter discontent with Obama and Democrats next fall.

California also picked a congressman for a vacant seat, Ohio voted on allowing casinos and a slew of cities selected mayors, including New York, which gave Michael Bloomberg a third term.

The outcomes of Virginia and New Jersey were sure to feed discussion about the state of the electorate, the status of the diverse coalition that sent Obama to the White House and the limits of the president’s influence — on the party’s base of support and on moderate current lawmakers he needs to advance his legislative priorities.

His signature issue of health care reform was dealt a blow hours before polls closed when Senate Democratic leader Harry Reid signaled that Congress may not complete health care legislation this year, missing Obama’s deadline and pushing debate into a congressional election year. Democrats in swing-voting states and moderate-to-conservative districts may be less willing to back Obama on issues like health care after Virginia and New Jersey showed there are limits to how much he can protect his rank and file from fallout back home.

The president had personally campaigned for Deeds and Corzine, seeking to ensure that independents and base voters alike turned out even if he wasn’t on the ballot — and voters still rejected them. Thus, the losses were blots on Obama’s political standing to a certain degree and suggested potential problems ahead as he seeks to achieve his policy goals, protect Democratic majorities in Congress and expand his party’s grip on governors’ seats next fall.

Interviews with voters leaving polling stations in both states were filled with reasons for Democrats to be concerned and for Republicans to be optimistic, particularly about independents — the crown jewel of elections because they often determine outcomes.

Independents were a critical part Obama’s victory in Virginia, New Jersey and across the country. But after more than a year of recession, they fled from Democrats in the two states, where the economy trumped all.

The Associated Press exit polls showed that nearly a third of voters in Virginia described themselves as independents, and nearly as many in New Jersey did. They preferred McDonnell by almost a 2-1 margin over Deeds in Virginia, and Christie over Corzine by a similar margin.

Last year, independents split between Obama and Republican John McCain in both states.

“Bob McDonnell’s victory gives Republicans tremendous momentum heading into 2010,” declared Haley Barbour, chairman of the Republican Governors Association. “His focus on ideas and pocketbook issues will serve as a model for Republicans running next year.”

Said Tim Kaine, the Democratic National Committee chairman and the term-limited Virginia governor: “We are disappointed.”

In both states, the surveys also suggested the Democrats had difficulty turning out their base, including the large numbers of first-time minority and youth voters whom Obama attracted. The Virginia electorate was whiter in 2009 than it was in 2008, when blacks and Hispanics voted in droves to elect the country’s first black president.

Democratic victories in both Virginia, a new swing state, and New Jersey, a Democratic stronghold, in 2005 preceded big Democratic years nationally in 2006 and 2008.

Tuesday’s impact on Obama’s popularity and on the 2010 elections could easily be overstated. Voters are often focused on local issues and local personalities.

Yet, national issues, like the recession, were clearly a factor, with voter attitudes shaped to some degree by how people feel about the state of their nation — and their place in it.

And, voter attitudes — particularly among independents — could bode ill for Democrats in moderate districts and in swing states like Ohio, Colorado and Nevada, should they remain unchanged when the party seeks to defend its turf next fall. In 2010, most governors, a third of the Senate and all members in the House will be on ballots.

It’s also difficult to separate Obama from the outcomes after he devoted a significant chunk of time working to persuade voters to elect Deeds in Virginia and re-elect Corzine in New Jersey.

More than four in 10 voters in Virginia said their view of Obama factored into their choice on Tuesday, and those voters roughly split between expressing support and opposition for the president. People who said they disapprove of Obama’s job performance voted overwhelmingly Republican, and those who approve of the president favored Deeds, the Democrat.

The Obama factor was similar in New Jersey, though there were slightly more voters who said the president did not factor into their choice.

The Islamic Hamas movement in the Gaza Strip can now launch rockets capable of reaching the Israeli metropolitan area of...