The austerity measures that were supposed to fix Greece’s problems are dragging down the country’s economy. Stores are closing, tax revenues are falling and unemployment has hit an unbelievable 70 percent in some places. Frustrated workers are threatening to strike back. 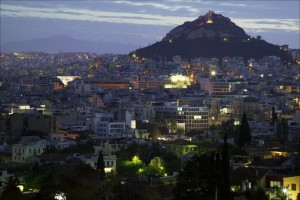 This dire prognosis comes even despite Athens’ massive efforts to sort out the country’s finances. The government’s draconian austerity measures have managed to reduce the country’s budget deficit by an almost unbelievable 39.7 percent, after previous governments had squandered tax money and falsified statistics for years. The measures have reduced government spending by a total of 10 percent, 4.5 percent more than the EU and International Monetary Fund (IMF) had required.

The problem is that the austerity measures have in the meantime affected every aspect of the country’s economy. Purchasing power is dropping, consumption is taking a nosedive and the number of bankruptcies and unemployed are on the rise. The country’s gross domestic product shrank by 1.5 percent in the second quarter of this year. Tax revenue, desperately needed in order to consolidate the national finances, has dropped off. A mixture of fear, hopelessness and anger is brewing in Greek society.

Unemployment Rates of up to 70 Percent

Unemployment in the city [the shipbuilding district of Perama] hovers between 60 and 70 percent, according to a study conducted by the University of Piraeus. While 77 percent of Greek shipping companies indicate they are satisfied with the quality of work done in Perama, nearly 50 percent still send their ships to be repaired in Turkey, Korea or China. Costs are too high in Greece, they say. The country, they argue, has too much bureaucracy and too many strikes, with labor disputes often delaying delivery times.

Barely any of the country’s industries can keep up with international competition in terms of productivity, and experts expect the country’s gross domestic product to fall by 4 percent over the course of the entire year. Germany, by way of comparison, is hoping for growth of up to 3 percent.

A short jaunt through Athens’ shopping streets reveals the scale of the decline. Fully a quarter of the store windows on Stadiou Street bear red signs reading “Enoikiazetai” — for rent. The National Confederation of Hellenic Commerce (ESEE) calculates that 17 percent of all shops in Athens have had to file for bankruptcy.

The entire country is in the grip of a depression. Everything seems to be going downhill. The spiral is continuing unabated, and there is no clear way out. The worse part, however, is the fact that hardly anyone still hopes that things will improve one day.

‘Things Are Starting to Simmer’

Menelaos Givalos, a professor of political science at Athens University, has appeared on television, warning viewers that the worst times are still to come. He predicts a large wave of layoffs starting in September, with “extreme social consequences.”

“Everything is getting more expensive, I’m hardly earning any money, and then I’m supposed to pay more taxes to help save the country? How is that supposed to work?” asks Nikos Meletis, the shipbuilder. He predicts the situation will only become more heated. “Things are starting to simmer here,” he says. “And at some point they’re going to explode.”

How Long Can Greece Hold On?

Inquiring minds just might be asking “How long can Greece hold on?”

I do not have the answer to that, besides it’s not the important question. A far more worrisome question is “When does similar strife spread to Spain, Portugal, and perhaps even Italy?”

Part of the blame for this goes to the bailout plan itself. France and to a lesser extent Germany would not take haircuts on Greek debt. Aid to Greece by the IMF and European banks simply threw good money after bad.

The problem did not go away. Instead, terms of the bailout made the situation worse.

In Case You Missed It:  Capital Gains Tax Increase is Bad. Here's Why
Posted in Financial and tagged Economy, Europe, Greece.

What About the Ground Zero Church?