This strange weather phenomenon, which you will see in the video below, happened in Newfoundland where the waves were actually frozen as they crashed on the beach. This is exactly what one would expect at the end of the warmest year on record, right? Are we freezing because of global warming? The media is still ranting that one of the effects of global warming is colder, wetter winters. 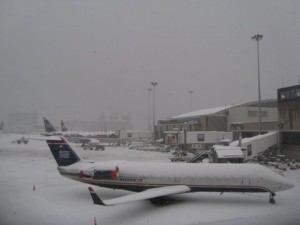 Global warming is why a low temperature record of 42 degrees that had been in place for 169 years in Fort Lauderdale was broken on December 7.   Global warming is why people are freezing to death in the northern hemisphere and why they are increasingly finding themselves buried in deeper and deeper snow. Global warming is now an insanity that has been implanted deep into the consciousness of the masses, meaning no matter how cold it gets, it’s getting warmer in the minds of the press and those who control it.

Dr. Willie Soon, astrophysicist and geoscientist at the Solar and Stellar Physics Division of the Harvard-Smithsonian Center for Astrophysics said, “It’s close to being insane to try to keep insisting these changes in carbon dioxide are going to create all of the disasters that the politicians and doomsayers are trying to tell us.  Saying the climate system is completely dominated by how much carbon dioxide we have in the system is crazy—completely wrong.  Carbon dioxide is not the major driver for the earth/climate system.” Obviously the sun is the major driver, but then we have other factors like air pollution from human and volcanic sources blocking out more light and thus heat, and now we are also having a breakdown in the Gulf loop current as well as a diminishing of the Gulf Stream. What we have, ladies and gentlemen, is heart-thumping climate change that is going to take a frightening toll on humanity.

Britain for is experiencing some of the most severe winter weather in a century.

If we look at Monday’s report from the Christian Science Monitor. “An early winter snow and ice season just got a little more peculiar over the weekend as a weakening regional high-pressure system over the Pacific allowed huge pockets of warm moisture onshore as part of a weather effect seen only every 10 to 15 years, meteorologists say.” That’s a meteorological expression that means totally freak storms are massing against the west coast with one after another coming ashore with a flurry of precipitation that is both frightening and dangerous.

There are spot reports of power outages, trees falling on cars and houses, cars stalling in water, and families trapped temporarily in their homes because of rushing water.

“A storm dropped 2.3 inches of rain in Los Angeles—an amount not seen in the dry valleys since 1921.  By the time it reached California’s higher altitudes, the rain had turned to snow, dropping 9 feet (now two days later it’s 13 feet) of the white stuff on Mammoth Mountain.  In the east, a high-pressure oscillation situated over Greenland has forced more Arctic air than usual down from Canada, creating unusual early winter conditions throughout the East—the same system that has brought blizzards to Britain and Scandinavia. A diminished regional high-pressure system over the central Pacific, which usually helps divert storms away from California and up into Washington and Oregon, means the West, too, is beginning to see some unusual weather, reports the Los Angeles Times.”

And now, after days of relentless rain, Southern California is awaiting the most intense storm system yet, where a monster storm was expected to bring torrential rain, thunderstorms, flooding, hail and possible tornadoes and water spouts. Forecasters warned of possible rainfall rates of .75 inch to 1 inch an hour and thunderstorm rates of 2 inches an hour in the region and predict this storm will march right across the entire continental United States.

Germany is brought to near standstill by 12 hours of solid snowfall.

I received a call from a friend in Germany. She told me that it is a complete disaster over there. They had just gotten buried yet again but this time by one of the worst storms she can remember. This one dumped 50-60cm of snow. They are approaching five feet of snow for the month.

If December is repeated in January and then February, March, and April you will not be able to find the houses on German streets.

Climate change is obviously quickly taking on a new dimension in the northern hemisphere this autumn. After the record heat wave this summer, Russia’s weather seems to have acquired a taste for the extreme. Forecasters say this winter could be the coldest Europe has seen in the last 1,000 years. The change is reportedly connected to the speed of the Gulf Stream, which has shrunk in half in just the last couple of years. Polish scientists say that it means the stream will not be able to compensate for the cold from the Arctic winds.  According to them, when the stream is completely stopped, a new Ice Age will begin in Europe.  Some are saying that day has come and gone already, meaning Europe, at least, is in for some very big trouble.  It was reported a few weeks ago that indications are the stream has completely stopped in terms of completing its journey to Europe.

This “thermohaline (from the Greek words for heat and salt) circulation” is an important part of the Earth’s climate that includes not only currents at the tops of the oceans, such as the Gulf Stream, but also currents deep under the water. The system is global and includes water that sinks around Antarctica.

The North Atlantic is dominated by the Gulf Stream—currents that bring warm water north from the tropics. At around 40° north—the latitude of Portugal and New York—the current divides. Some water heads southwards in a surface current known as the subtropical gyre, while the rest continues north, leading to warming winds that raise European temperatures by 5°C to 10°C making Europe warmer than it would otherwise be.

The slowing down or stopping of these currents could result in catastrophic changes in the world’s climate. Seems like this is already happening as the Gulf loop, and now Gulf currents weaken, and miles above, even the Jet Stream seems to be affected.

It is not normal for storms to travel from the east coast back to the west. The Gulf Stream is part of a global system of ocean currents, which, the generally accepted theory says, is driven at least in part by salty, cold water sinking in the northern Atlantic. As the water sinks, more water flows north to replace it, which means if anything slows down the sinking, the Gulf Stream would slow down and maybe other currents would slow down.

In Case You Missed It:  Black Unemployment Rate Rises Under Biden After Dropping To Historic Low Under Trump
Posted in Freedoms and tagged Climate, Europe, Global Warming, United Socialist States of America.

By Bill Warner- You can sort the written and spoken words about Islam into two categories -- negative and apologist....