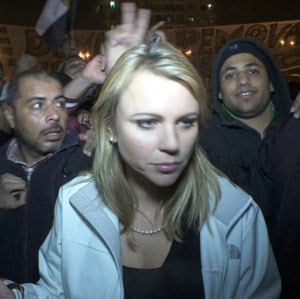 The TV crew with Logan, who is also the network’s chief foreign correspondent, had its cameras rolling moments before she was dragged off — and caught her on tape looking tense and trying to head away from a crowd of men behind her in Tahrir Square.

“Logan was covering the jubilation . . . when she and her team and their security were surrounded by a dangerous element amidst the celebration,” CBS said in a statement. “It was a mob of more than 200 people whipped into a frenzy.

“In the crush of the mob, [Logan] was separated from her crew. She was surrounded and suffered a brutal and sustained sexual assault and beating before being saved by a group of women and an estimated 20 Egyptian soldiers.

“She reconnected with the CBS team, returned to her hotel and returned to the United States on the first flight the next morning,” the network added. “She is currently in the hospital recovering.”

A network source told The Post that her attackers were screaming, “Jew! Jew!” during the assault. And the day before, Logan had told Esquire.com that Egyptian soldiers hassling her and her crew had accused them of “being Israeli spies.” Logan is not Jewish.

In Friday’s attack, she was separated from her colleagues and attacked for between 20 to 30 minutes, The Wall Street Journal said.

Her injuries were described to The Post as “serious.”

CBS went public with the incident only after it became clear that other media outlets were on to it, sources said.
“A call came in from The [Associated Press]” seeking information, a TV-industry source told The Post. “They knew she had been attacked, and they had details. CBS decided to get in front of the story.”

Most network higher-ups didn’t even know how brutal the sexual assault was until a few minutes before the statement went out.

“We were surprised it stayed quiet” as long as it did, one source said.

Another source insisted that Logan was “involved in the process” of deciding whether to make her attack public, and ultimately understood why the statement had to be released.

The horrific incident came a week after the 39-year-old reporter was temporarily detained by Egyptian police amid tensions over foreign coverage of the country’s growing revolution.

As part of the anti-media backlash, CNN’s Anderson Cooper had also been roughed up, and ABC correspondent Brian Hartman had been threatened with beheading.

“[Logan] was not in the country for long — she’d been thrown out, if you remember — and had just gone back in,” one source said.

“She had security with her, but it wasn’t enough.”

Before the attack, Logan — who is based in Washington, where she lives with her 2-year-old daughter and husband — had been set to return to the States sometime over the weekend to tape a “60 Minutes” segment on Wael Ghonim.

Ghonim, Google’s head of marketing in the Middle East, had been briefly kidnapped after helping to organize protesters.
But after she was assaulted, Logan went back to her hotel, and within two hours — sometime late Friday and into early Saturday — was flown out of Cairo on a chartered network jet, sources said.

She wasn’t taken to a hospital in Egypt because the network didn’t trust local security there, sources said.
And neither CBS nor Logan reported the crime to Egyptian authorities because they felt they couldn’t trust them, either, the sources said. “The way things are there now, they would have ended up arresting her again,” one source said.

The Fall of the United States