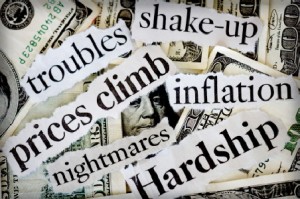 In our estimation, the most likely time frame for a full-fledged outbreak of hyperinflation is between the years 2013 and 2015. Americans who wait until 2013 to prepare, will most likely see the majority of their purchasing power wiped out. It is essential that all Americans begin preparing for hyperinflation immediately.

Here are NIA’s top 12 warning signs that hyperinflation is about to occur:

1) The Federal Reserve is Buying 70% of U.S. Treasuries. The Federal Reserve has been buying 70% of all new U.S. treasury debt. Up until this year, the U.S. has been successful at exporting most of its inflation to the rest of the world, which is hoarding huge amounts of U.S. dollar reserves due to the U.S. dollar’s status as the world’s reserve currency. In recent months, foreign central bank purchases of U.S. treasuries have declined from 50% down to 30%, and Federal Reserve purchases have increased from 10% up to 70%. This means U.S. government deficit spending is now directly leading to U.S. inflation that will destroy the standard of living for all Americans.

3) China Moving Away from U.S. Dollar as Reserve Currency. The U.S. dollar became the world’s reserve currency because it was backed by gold and the U.S. had the world’s largest manufacturing base. Today, the U.S. dollar is no longer backed by gold and China has the world’s largest manufacturing base. There is no reason for the world to continue to transact products and commodities in U.S. dollars, when most of everything the world consumes is now produced in China. China has been taking steps to position the yuan to be the world’s new reserve currency.

The People’s Bank of China stated earlier this month, in a story that went largely unreported by the mainstream media, that it would respond to overseas demand for the yuan to be used as a reserve currency and allow the yuan to flow back into China more easily. China hopes to allow all exporters and importers to settle their cross border transactions in yuan by the end of 2011, as part of their plan to increase the yuan’s international role. NIA believes if China really wants to become the world’s next superpower and see to it that the U.S. simultaneously becomes the world’s next Zimbabwe, all China needs to do is use their $1.15 trillion in U.S. dollar reserves to accumulate gold and use that gold to back the yuan.

4) Japan to Begin Dumping U.S. Treasuries. Japan is the second largest holder of U.S. treasury securities with $885.9 billion in U.S. dollar reserves. Although China has reduced their U.S. treasury holdings for three straight months, Japan has increased their U.S. treasury holdings seven months in a row. Japan is the country that has been the most consistent at buying our debt for the past year, but that is about the change. Japan is likely going to have to spend $300 billion over the next year to rebuild parts of their country that were destroyed by the recent earthquake, tsunami, and nuclear disaster, and NIA believes their U.S. dollar reserves will be the most likely source of this funding. This will come at the worst possible time for the U.S., which needs Japan to increase their purchases of U.S. treasuries in order to fund our record budget deficits.

5) The Fed Funds Rate Remains Near Zero. The Federal Reserve has held the Fed Funds Rate at 0.00-0.25% since December 16th, 2008, a period of over 27 months. This is unprecedented and NIA believes the world is now flooded with excess liquidity of U.S. dollars.

When the nuclear reactors in Japan began overheating two weeks ago after their cooling systems failed due to a lack of electricity, TEPCO was forced to open relief valves to release radioactive steam into the air in order to avoid an explosion. The U.S. stock market is currently acting as a relief valve for all of the excess liquidity of U.S. dollars. The U.S. economy for all intents and purposes should currently be in a massive and extremely steep recession, but because of the Fed’s money printing, stock prices are rising because people don’t know what else to do with their dollars.

NIA believes gold, and especially silver, are much better hedges against inflation than U.S. equities, which is why for the past couple of years we have been predicting large declines in both the Dow/Gold and Gold/Silver ratios. These two ratios have been in free fall exactly like NIA projected.

The Dow/Gold ratio is the single most important chart all investors need to closely follow, but way too few actually do. The Dow Jones Industrial Average (DJIA) itself is meaningless because it averages together the dollar based movements of 30 U.S. stocks. With just the DJIA, it is impossible to determine whether stocks are rising due to improving fundamentals and real growing investor demand, or if prices are rising simply because the money supply is expanding.

6) Year-Over-Year CPI Growth Has Increased 92% in Three Months. In November of 2010, the Bureau of Labor and Statistics (BLS)’s consumer price index (CPI) grew by 1.1% over November of 2009. In February of 2011, the BLS’s CPI grew by 2.11% over February of 2010, above the Fed’s informal inflation target of 1.5% to 2%. An increase in year-over-year CPI growth from 1.1% in November of last year to 2.11% in February of this year means that the CPI’s growth rate increased by approximately 92% over a period of just three months. Imagine if the year-over-year CPI growth rate continues to increase by 92% every three months. In 9 to 12 months from now we could be looking at a price inflation rate of over 15%. Even if the BLS manages to artificially hold the CPI down around 5% or 6%, NIA believes the real rate of price inflation will still rise into the double-digits within the next year.

7) Mainstream Media Denying Fed’s Target Passed. You would think that year-over-year CPI growth rising from 1.1% to 2.11% over a period of three months for an increase of 92% would generate a lot of media attention, especially considering that it has now surpassed the Fed’s informal inflation target of 1.5% to 2%. Instead of acknowledging that inflation is beginning to spiral out of control and encouraging Americans to prepare for hyperinflation like NIA has been doing for years, the media decided to conveniently change the way it defines the Fed’s informal target.

The media is now claiming that the Fed’s informal inflation target of 1.5% to 2% is based off of year-over-year changes in the BLS’s core-CPI figures. Core-CPI, as most of you already know, is a meaningless number that excludes food and energy prices. Its sole purpose is to be used to mislead the public in situations like this. We guarantee that if core-CPI had just surpassed 2% and the normal CPI was still below 2%, the media would be focusing on the normal CPI number, claiming that it remains below the Fed’s target and therefore inflation is low and not a problem.

The fact of the matter is, food and energy are the two most important things Americans need to live and survive. If the BLS was going to exclude something from the CPI, you would think they would exclude goods that Americans don’t consume on a daily basis. The BLS claims food and energy prices are excluded because they are most volatile. However, by excluding food and energy, core-CPI numbers are primarily driven by rents. Considering that we just came out of the largest Real Estate bubble in world history, there is a glut of homes available to rent on the market. NIA has been saying for years that being a landlord will be the worst business to be in during hyperinflation, because it will be impossible for landlords to increase rents at the same rate as overall price inflation. Food and energy prices will always increase at a much faster rate than rents.

10) Obama Lies About Foreign Policy. President Obama campaigned as an anti-war President who would get our troops out of Iraq. NIA believes that many Libertarian voters actually voted for Obama in 2008 over John McCain because they felt Obama was more likely to end our wars that are adding greatly to our budget deficits and making the U.S. a lot less safe as a result. Obama may have reduced troop levels in Iraq, but he increased troops levels in Afghanistan, and is now sending troops into Libya for no reason.

The U.S. is now beginning to occupy Libya, when Libya didn’t do anything to the U.S. and they are no threat to the U.S. Obama has increased our overall overseas troop levels since becoming President and the U.S. is now spending $1 trillion annually on military expenses, which includes the costs to maintain over 700 military bases in 135 countries around the world. There is no way that we can continue on with our overseas military presence without seeing hyperinflation.

11) Obama Changes Definition of Balanced Budget. In the White House’s budget projections for the next 10 years, they don’t project that the U.S. will ever come close to achieving a real balanced budget. In fact, after projecting declining budget deficits up until the year 2015 (NIA believes we are unlikely to see any major dip in our budget deficits due to rising interest payments on our national debt), the White House projects our budget deficits to begin increasing again up until the year 2021. Obama recently signed an executive order to create the “National Commission on Fiscal Responsibility and Reform”, with a mission to “propose recommendations designed to balance the budget, excluding interest payments on the debt, by 2015”. Obama is redefining a balanced budget to exclude interest payments on our national debt, because he knows interest payments are about to explode and it will be impossible to truly balance the budget.

12) U.S. Faces Largest Ever Interest Payment Increases. With U.S. inflation beginning to spiral out of control, NIA believes it is 100% guaranteed that we will soon see a large spike in long-term bond yields. Not only that, but within the next couple of years, NIA believes the Federal Reserve will be forced to raise the Fed Funds Rate in a last-ditch effort to prevent hyperinflation. When both short and long-term interest rates start to rise, so will the interest payments on our national debt. With the public portion of our national debt now exceeding $10 trillion, we could see interest payments on our debt reach $500 billion within the next year or two, and over $1 trillion somewhere around mid-decade. When interest payments reach $1 trillion, they will likely be around 30% to 40% of government tax receipts, up from interest payments being only 9% of tax receipts today. No country has ever seen interest payments on their debt reach 40% of tax receipts without hyperinflation occurring in the years to come.

“Why Are You Abandoning Us?” Broadcasting to China Goes Quiet

The end of an era is at hand. Today marks the last day of BBC World Service Broadcasts to China...