Two interviews with mothers of Martyrs expressing their joy over the Martyrdom of their respective sons, one broadcast on the Hamas website, and the other on Arab News Network TV. 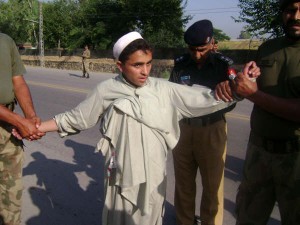 In the name of Allah

In the first interview with Um Nidal, she says that today is the best day of her life as her son becomes a Martyr, and if she had 100 children like her son, she would offer them to Allah as well. She states that while there is nothing more precious than children, for the sake of Allah, what is precious becomes cheap.

The second interview is with a mother of a Martyr. She says that Jihad is a religious obligation and that it would have been wrong to try to change her son’s mind. She put her motherly feelings aside for a greater cause because she wanted the best for her son, and she chose eternal bliss in the Afterlife for him. As much as her living children honor her, she states that they are incomparable to the honor that her martyred son showed her.

Um Nidal, mother of terrorist, before sending her son to carry out a terror attack:

“How do I feel, as I promise my son Paradise, and as I offer something (my son) for Allah? By Allah, today is the best day of my life. I feel that our Lord is pleased with me, because I am offering something (my son) to His sake. I wish to offer more [sons] for Allah’s forgiveness, and for the flag [of Islam], “There is no god but Allah,” to fly over Palestine. That’s what we want. We want the rule of Islam.

I’m not parting from him [as he goes] to his death, but rather I’m parting from him as he goes to a better life, the Afterlife, which our Lord has promised us. By Allah, if I had 100 children like [my son] Muhammad, I would offer them with sincerity and willingly. It’s true that there’s nothing more precious than children, but for the sake of Allah, what is precious becomes cheap.

Another mother of a terrorist, in an interview after her son murdered four Israeli teenagers:

“I gave my son to Jihad for Allah. It’s our religious obligation. If I wanted to have compassion for him, or to make him change his mind, it would be wrong, a mistake. I don’t want to be guided by my feelings, a mother’s feelings. I put them aside for a while for something greater, although a mother’s feelings are involved. Why? Because I love my son, and I want to choose the best for him, and the best is not life in this world. For us there is an Afterlife, the eternal bliss. So if I love my son, I’ll choose eternal bliss for him. As much as my living children honor me, it will not be like the honor that the Martyr has given me. He will be our intercessor on the Day of Resurrection. What more can I ask for? Allah willing, the Lord will promise us Paradise. That’s the best I can hope for. The greatest honor [my son] gave me was his Martyrdom.”

“Economic fairness” is expected to be the topic of President Barack Obama’s State of the Union address on Tuesday night,...