Anti-Zionists sprayed hate slogans on Ammunition Hill and tried to burn an Israeli flag, two days before Remembrance Day for Fallen Soldiers. The site was the scene of one of the bloodiest battles in the Six-Day War in 1967. 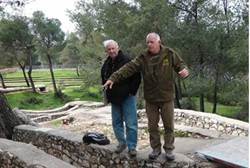 The pre-dawn vandals sprayed, “Guenther Grass was right,” referring to the German poet. Another slogan stated “Zionism is the mother of all hate.” Grass is a Nobel Literature Prize laureate and exposed member of the Nazi Waffen-SS who recently alleged that Israel is a “danger to world peace.”

Jerusalem Mayor Nir Barkat denounced the vandalism and  immediately sent a crew to remove the slogans and restore the site to proper condition before Remembrance Day ceremonies and Independence Day celebrations, which begin Tuesday night.

A complaint was filed with Jerusalem police, who are investigating.

Ammunition Hill was built by the British during the Mandate period and was a key point for Israeli soldiers to capture before they could access Jerusalem’s Old City and the Jerusalem-Ramallah highway in the Six-Day War.

The site is a memorial to those who fell in battle and is national site noting the reunification of Jerusalem in 1967.

Paratroopers were able to capture the strategic hill by blowing up a large reinforced bunker that housed Jordanian soldiers at the site, which features winding trenches.

Thirty-six Israeli soldiers died in the battle, which lasted several hours from night until dawn.

The International Olympic Committee (IOC) rejected a request from the families of the Israeli athletes who were murdered by Arab...