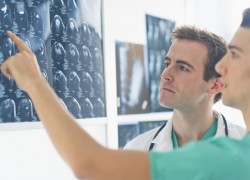 Maine’s new market-based health care reform is bringing insurance premiums down by as much as 60 percent in the individual market.

Elected in 2010, Governor Paul LePage (R) made health reform a top priority and signed Maine’s new reform into law in May 2011. Shortly thereafter, he stated, “I believe that common sense, personal experience, and our nation’s collective experience show that the private sector is superior to the government sector. It is time that we reverse course, create a more competitive marketplace, and make a healthier health care market.” After just one year of implementation, building reform around those principles has proved successful.

But Maine’s reform success comes after years of ever-increasing premiums and damaging reforms. In 1993, the state legislature enacted a law with components that were similar to provisions currently in Obamacare, such as community rating and guaranteed issue. These regulations caused the number of people insured in Maine’s individual market to drop by 44 percent from 1993 to 2009.

In October 2011, Maine began implementing free market-based reforms that doubled the variation in premium costs allowed for different age groups. This encourages younger and healthier individuals to enter the market, which lowers costs. The Wall Street Journal illuminates the savings on an individual basis:

In addition, Allumbaugh expects new insurers to enter the more friendly market, increasing competition and driving costs down even further in the future.

Maine’s story serves as a twofold lesson, as Bragdon and Allumbaugh write:

Will Obamacare make America learn the hard way, or can we learn from Maine’s mistakes and repeal Obamacare?

The UN’s cultural agency, UNESCO, said on Monday it will, for the first time, consider a Palestinian Authority site for...