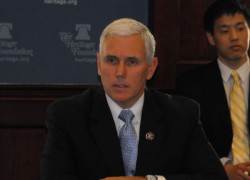 Indiana Superintendent of Schools Tony Bennett is one of the country’s great education reformers. As superintendent, he worked to create one of the most expansive voucher programs in the country, implemented merit pay for teachers, and increased transparency of outcomes in Indiana schools.

Bennett lost his re-election bid last night and will no longer be at the helm of Indiana’s education system.

While Bennett was one of the country’s staunchest school choice advocates, at the same time, he succumbed to a very anti-choice effort: the Common Core national standards push. The urging of otherwise conservative education reformers, along with carrots and sticks from the Obama Administration, likely catalyzed his support of the effort.

Under Bennett’s leadership, Indiana created one of the most robust school choice programs in the country—to the benefit of hundreds of thousands of children in the state. But Indiana’s simultaneous embrace of national standards has created concern about regulations on the private school sector. As The Pioneer Institute’s Jim Stergios noted:

Indiana has a voucher program. And that voucher program came with the requirement that private, including Catholic, schools had to take state-sanctioned tests. With the transfer over to national standards and tests, private schools now frame their curricula on Common Core and must take the (not yet finished and never field tested!) national tests.

Bennett’s replacement, Glenda Ritz, opposes Bennett’s heightened emphasis on testing (leaving observers to wonder whether she would oppose Common Core national standards) but also opposes school choice (Ritz had the full support of Indiana’s teachers union). While Ritz could work to divest Indiana of its entanglement with national standards, there is fear that she could also limit the state’s vaunted school choice options.

This is at the heart of why education reformers closely watching Indiana’s state superintendent race faced a Catch-22: Many have argued that the power of school choice that Bennett championed is limited if all schools are teaching the same curriculum. And what good is the testing freedom Ritz favors absent the ability to choose which school your child attends?

Hoosiers interested in education reform can take heart, however. Newly elected Governor Mike Pence (R) could be a strong education reform ally, championing school choice and working to limit federal overreach into education by opposing national standards and tests. The Pioneer Institute notes that Pence “has a strong record of not liking Washington mandates. It would be a remarkable about-face if he were to support national standards.”

With Bennett’s departure, an anti-testing superintendent on the way in, and a conservative governor, Indiana’s involvement with national standards is now in question. Indiana should take the opportunity to put the brakes on its involvement and regain control of its standards and assessments.

It is unclear whether Bennett’s embrace of national standards contributed to his election loss. But what is certain is that superintendents and governors across the country should think carefully about their support of top-down education initiatives. Parents and teachers see Common Core for what it is: a nationalization of the content taught in local schools and a further entrenchment of Washington-backed testing.

Indiana has the opportunity to reverse course on Common Core. Newly elected education leaders, governors, and state legislators should also back away from the effort. They should work to reform state standards and tests and, as Bennett did to great acclaim, work to increase educational options for children.

Here’s hoping that Bennett has the opportunity to continue increasing educational opportunities for children and that state leaders make a hasty retreat from the Common Core national standards movement favored by a centralizing Administration in Washington.

Appears tonight the United States has lost, as the country steams toward socialism, massive taxation and further debt. If you...