A detailed analysis of FBI statistics covering ten full calendar years since the 9/11 terrorist attacks reveals that, on a per capita basis, American Muslims, contrary to spin, have been subjected to hate crimes less often than other prominent minorities. From 2002 to 2011, Muslims are estimated to have suffered hate crimes at a frequency of 6.0 incidents per 100,000 per year — 10 percent lower than blacks (6.7), 48 percent lower than homosexuals and bisexuals (11.5), and 59 percent lower than Jews (14.8). Americans should keep these numbers in mind whenever Islamists attempt to silence critics by invoking Muslim victimhood. 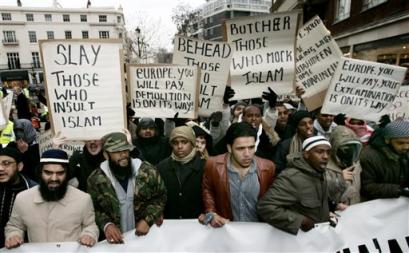 The federal government defines a hate crime as a “criminal offense against a person or property motivated in whole or in part by an offender’s bias against a race, religion, disability, ethnic origin, or sexual orientation.” Though statutes mandating harsher punishments for hatred-inspired acts raise the specter of thought crimes, emphasize group identity over the individual, and seemingly favor certain victims over others, the FBI’s tracking of such deeds shines important light on the state of the nation. Annual reports assembled from local law enforcement data are accessible on the website of the FBI’s Uniform Crime Reporting Program. Especially useful is Table 1 of each compilation, which summarizes the number of incidents, offenses, victims, and known offenders for hate crimes committed against members of different groups.

Anti-Muslim incidents rose to 160 in 2010, an increase that Islamists and their mouthpieces eagerly blamed on rampant “Islamophobia,” particularly opposition to a proposed giant mosque near Ground Zero. Based on freshly released FBI data, there was little change in 2011, with 157 incidents, 175 offenses, 185 victims, and 138 known offenders. Mark Potok of the reliably leftist Southern Poverty Law Center (SPLC), which puts foes of radical Islam in the same category as Klansmen and neo-Nazis, has declared that “hate crimes against perceived Muslims … remained at relatively high levels” as a result of “Islam-bashing propaganda,” anti-Shari’a legislation, and ongoing resistance to new mosques, relaying that “several were attacked by apparent Islamophobes.” Note the key word: “several” in a country with at least 2,106 mosques, a few million Muslims, and 300 million–plus non-Muslims.

As hinted above, the dark portrait of America as a nation of violent bigots uniquely hostile to Muslims does not withstand quantitative scrutiny. To smooth out year-to-year variations, consider the past decade (2002–11) of FBI-recorded hate crimes. There were 1,388 incidents against Muslims during this span, compared with 25,130 against blacks; 12,030 against homosexuals and bisexuals; 9,198 against Jews; and 5,057 against Hispanics. Even majority whites endured 7,185 incidents, while Christians (Protestants and Catholics combined) were targeted in 1,126 incidents. Adherents of “other religions” faced 1,335, very close to the anti-Muslim tally.

Due to the different sizes of minority groups, however, raw numbers cannot tell the complete tale. More insightful are per capita rates. Some back-of-the-envelope calculations follow.

The U.S. Census Bureau derived the total, Hispanic, and black populations for 2000 and 2010 from direct counts. Approximating their evolution with linear models, one can obtain estimates for any non-census year and, most important, the 2002–11 averages: total (299.2 million), Hispanic (45.2 million), and black (37.4 million). Surveys indicate that around 3.5 percent of American adults identify as homosexual or bisexual; applying this percentage to the total population gives a 2002–11 average of 10.5 million. Two studies have pegged the number of American Jews at about 6.5 million in 2010. Figures for 2000 vary (5.3–6.2 million), so for simplicity we set the average Jewish population between 2002 and 2011 at 6.2 million to account for moderate growth. As for Muslims, whose population estimates have a convoluted history, reputable recent numbers have been provided by the Pew Research Center (2.75 million in 2011) and the Association of Statisticians of American Religious Bodies (2.6 million in 2010; full data extractable here), which agree on the current size and growth rate (around 100,000 per year). The 2002–11 average is roughly 2.3 million Muslims.

Adding the FBI data yields per capita frequencies of hate crimes for the past decade. Of the five main minority groups discussed above, Jews were most likely to experience hate crimes, with 14.8 incidents per 100,000 Jews annually. Homosexuals and bisexuals (combined) came next (11.5), followed by blacks (6.7), Muslims (6.0), and Hispanics (1.1). Rates for majority whites and Christians were much smaller.

With hate crimes befalling Muslims far less often than they do Jews or homosexuals and bisexuals and slightly less often than they befall blacks, it is clear that anti-Muslim incidents are disproportionate to those targeting other minorities only in terms of the hype generated on their behalf. A closer look reinforces this conclusion.

Second, what of the Muslim population estimate? In hopes of inflating their presumed clout, Islamist groups routinely assert the existence of around 7 million American Muslims, three times as many as the more objective measurements. Note, however, that this Islamist-promoted figure actually would weaken their narrative of anti-Muslim hate crimes, because a higher population reduces the per capita frequency, thus painting them as even less significant in a statistical sense.

Third, though 2001, whose rash of hate crimes against Muslims was an outlier tied to a unique event, has been excluded from the above analysis, the 2001–11 rate for Muslims was just 7.4 incidents per 100,000 per year, still far short of that applying to Jews or homosexuals and bisexuals. Self-pitying Islamists also want us to forget that in spite of 9/11-related anger, anti-Jewish hate crimes outnumbered anti-Muslim hate crimes that year by more than two to one.

Fourth, could incomplete data affect the finding that Muslims are victimized less often than many non-Muslim minorities? Theoretically, yes, but evidence for this is scant. SPLC talking heads regularly cite a 2005 Justice Department study, using surveys of victims’ perceptions of whether prejudice had motivated crimes against them, to argue that the FBI underestimates overall hate crimes by an order of magnitude. Yet even if those claims are valid, nothing suggests that anti-Muslim crimes are more or less likely to be ignored than others, which would be necessary to alter the relative frequencies of hate crimes against different groups. Another source of incompleteness is that not all local law enforcement agencies take part in the FBI’s tabulation, but once again there is no obvious bias here that would preferentially diminish hate crimes against Muslims. Also note that the percentage of participating agencies (see the FBI’s Table 12) is large and slowly climbing, covering 86 percent of the U.S. population in 2002 and 92 percent in 2011, meaning that improved reporting could have helped elevate the number of FBI-recorded hate crimes in later years. Although this impact is probably small, it further chips away at the meme of rising hate.

Fifth, consider hate crimes with the worst possible outcome: death. The subject has been in the headlines after a deranged woman suspected of murdering a Hindu man, Sunando Sen, by pushing him from a New York subway platform on December 27 told police that she “hate[s] Hindus and Muslims,” whom she collectively blames for 9/11, and that she believed Sen to be Muslim. Following the initial rush to label Sen’s murder a hate crime, journalists have learned that the alleged murderer had a long history of severe mental illness, had received only intermittent treatment despite numerous pleas for help and warnings from the family, and had repeatedly gone off her medication.

As the usual voices fault “our oversaturated Islamophobic environment” and “growing anti-Muslim hate,” they neglect to mention how rare it is for an actual or perceived Muslim to die in a hate crime. By the FBI’s count, 74 people were killed in hate crimes (“murder and nonnegligent manslaughter” in Table 4) from 2002 to 2011, but not a single one in an anti-Muslim incident. Indeed, the FBI lists no anti-Muslim fatalities since 1995, corresponding to the earliest report available.

Why do Islamists obfuscate? The false picture of an epidemic of physical assaults on Muslims distracts Americans from Islamist hatred and enshrines Muslims as the country’s leading victim class, a strategy intended to intimidate citizens into remaining quiet about Islamic supremacism and lay the groundwork for granting Muslims special privileges and protections at the expense of others. In short, anti-Muslim hate crimes are a powerful Islamist weapon.

At its extreme, the desire to achieve victim status in this manner has fueled the phenomenon of fake hate crimes, through staging, blatant misrepresentation, or both. An illustrative example is the March 2012 murder of Shaima Alawadi, a hijab-wearing California woman found beaten to death at home with a note calling her a terrorist beside her body. Islamists and their credulous media allies pounced at the opportunity to condemn the supposed tidal wave of “Islamophobia,” even as marital problems emerged as a potential motive. In November, police arrested Alawadi’s husband.

Genuine hate crimes committed against any group are deplorable, but they must be placed in the proper context. First, hate crimes are uncommon across the board. Second, despite hyperbole about “anti-Muslim violence spiralling out of control in America” and producing “one of the most hostile moments that the Muslim American community has ever experienced,” the real story is the amazing tolerance and restraint of the American people. Imported Muslim fanatics murdered thousands on 9/11, the threat of homegrown jihad has crystallized, and Islamists abroad continue to slaughter innocents daily. Though Americans could find no lack of excuses to strike out at their Muslim neighbors, almost nobody does — and thankfully so. As such, the annual victims of anti-Muslim hate crimes average between three and four per U.S. state and would have trouble filling a decent-sized jetliner.

Many Americans take a critical view of Islam, but virtually all restrict their negative sentiments to the domain of words and ideas, as civilized human beings should. People are free to have opinions, including anti-Islamic ones, regardless of how Islamists long to muzzle them. Islamists, in turn, are entitled to their own opinions about life in America. But they are not entitled to their own facts.

David J. Rusin is a research fellow at Islamist Watch, a project of the Middle East Forum.

Google’s app store for Android cell phone products is offering at least half a dozen free and paid apps featuring...