Sirens rang out and church bells tolled on Friday as Poland marked the 70th anniversary of the Warsaw ghetto uprising that saw young Jews rise up against Nazi German forces. 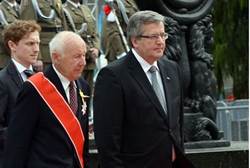 Hundreds of people including, Holocaust survivors gathered, at the Monument to the Ghetto Heroes, where Polish President Bronislaw Komorowski called the revolt a “fight for dignity”, according to AFP.

“But it was also an accusation of passivity and ineffectiveness of the whole free world, the world that could not bring itself to help,” he added.

In attendance were the president of the European Parliament, Martin Schulz, Israeli Education Minister Shai Piron, plus one of the last three living uprising survivors.

Simcha “Kazik” Rotem, 89, recalled that by April 1943 most of the ghetto’s Jews had died and the 50,000 who remained expected the same fate.

But rather than die in the gas chambers at the Treblinka death camp, Rotem and hundreds of his comrades launched the April 19 uprising to “choose the kind of death” they wanted.

“But to this very day I keep thinking whether we had the right to make the decision to start the uprising and by the same token to shorten the lives of many people by a week, a day or two,” Rotem said.

“Nobody gave us authorization to do that and that’s the doubt I have to live with.”

Around 7,000 Jews died in the ghetto uprising, most of them burned alive, and nearly all the rest were then sent to Treblinka.

Rotem survived by masterminding an escape through the drain system with dozens of comrades. Polish sewer workers guided them to the surface.

Poland’s chief rabbi Michael Schudrich told AFP that the 70th anniversary is special precisely because “we still have among us those who actually fought”.

“There’s a sense that we have an obligation to make sure we really remember to pay tribute now while we still can hear from (them) and so we can thank them for what they did.”

It was also the first anniversary to begin with a few minutes of bell tolls — an important “gesture on the part of the Church”, according to Piotr Kadlcik, president of the Jewish Community of Warsaw.

The German parliament observed a minute of silence Friday in memory of the fighters.

“We recall with great humility the suffering, the self-sacrifice and the fight for freedom of the people of the Warsaw ghetto,” Foreign Minister Guido Westerwelle said in Berlin, according to AFP.

Once Europe’s Jewish heartland, Poland saw 90 percent of its 3.3 million pre-war Jews wiped out by 1945.

The Museum of the History of Polish Jews opened Friday to bear witness to that thriving 1,000-year presence that was crippled by the Holocaust.

On Thursday, around 100 people were gathered at the Nozyk synagogue in Warsaw to pay tribute to the hundreds of poorly-armed Jews who took a stand against their occupiers 70 years ago.

On Wednesday, Poland’s parliament paid tribute to the fighters of the Warsaw ghetto uprising. Parliament Speaker Ewa Kopacz remembered the hundreds Jews who rose up against the Nazis, saying their “heroism and sacrifice deserves our respect and admiration.”

Reflecting in a post on his Facebook page, Education Minister Rabbi Piron wrote that he felt he was representing his grandparents during the ceremony, adding that his travels to official visits around the Polish capital with a police escort gave him the feeling that not only did the leaders of the uprising succeed, but so did his grandparents, explaining, “They refused to die a cruel death, and now their grandson is a minister in the government of Israel.”

He said the ceremony gave him the feeling of “commitment to continue the relay race, to take the baton…of responsibility and make a commitment to work non-stop for the glory of Israel.”

EU foreign ministers, among them Britain's William Hague and Laurent Fabius of France, have said they will back EU efforts...