It has been learned that the relationship between President Barack Obama’s half-brother Malik Obama and Sudan’s President Omar Al-Bashir is much closer than previously thought. Malik is the Executive Secretary of the Islamic Da’wa Organization (IDO) as reported by all major Saudi press,including Okaz.

How significant is this?

Very significant. The IDO has been created by the Sudanese Government, which is considered by the U.S. State Department as a terrorist state. This places Malik Obama in bed with terrorists and working as an official with a terrorist state.

We have the evidence to prove it – meetings, photos, et. al.

Bashir is wanted by the International Criminal Court (ICC) on seven counts relating to crimes against humanity. As such, Bashir is the head of a country that the U.S. State Department has identified as a State Sponsor of terrorism, a designation issued in 1993.

In 2010, Malik Obama attended the Islamic Da’wa Organization (IDO) conference in Khartoum, the capital of Sudan. One of the objectives of the IDO is to spread Wahhabist Islam across the African continent.

Bashir wasn’t just present at the conference; he supervised it. In this photo, from the Barack H. Obama Foundation (BHOF) website, headed by Malik, Bashir can be seen dressed in black, to the right. Another man to take notice of is seated directly to the right of Bashir; his name is Suar Al Dahab (more on him later): 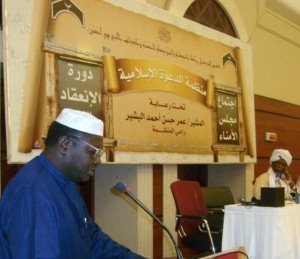 So, what is the significance of Malik’s schmoozing with Al Dahab? For one thing, as Chairman of the IDO, Al Dahab is Malik’s boss (it’s always wise to schmooz with your boss).

However, take a look at who Al Dahab schmoozes with – the Prime Minister of Hamas, Ismail Haniyeh and the Muslim Brotherhood’s spiritual leader, Yusuf Al-Qaradawi.

On a recent trip to Gaza, which Al Dahab attended, Haniyeh presented Qaradawi with Palestinian citizenship and signed his passport.

Here is video of the three men in Gaza earlier this month. Take note that Malik Obama’s boss – Suar Al Dahab – is expressing solidarity with both a guy who heads an organization the U.S. State Department has identified as a Foreign Terrorist Organization (Hamas) and another guy (Qaradawi) who thinks Hitler didn’t finish the job when it came to the Jews.

Of course, there will be naysayers who will accuse us of attributing blame to Barack for the sins of his half-brother Malik. Those who make such charges encounter problems because Barack and his brother are very close. Each was the best man at the other’s wedding and Malik has made multiple visits to the White House, as you can see in the picture. 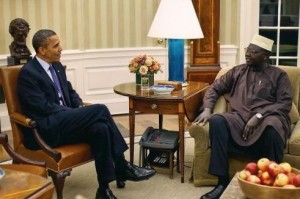 Oh, we almost forgot. Whenever uncomfortable truths about Barack Obama arise, he always seems to know nothing about anything related to the matter in question. He didn’t know what happened when a video was blamed for the 9/11 attacks in Benghazi, he learned about the IRS scandal from the media, and he has appointed Attorney General Eric Holder to investigate Eric Holder over the reporting scandals.

This leads us to the very favorable treatment received by none other than Malik Obama in his capacity as head of the Barack H. Obama Foundation (BHOF).

In May of 2011, BHOF received incredibly expeditious (and retroactive) tax-exempt status from the IRS in general, Lois Lerner in particular. Lerner’s signature is at the bottom of BHOF’s approval letter. If Malik was the odd man out, how did he receive such unheard of, expeditious, retroactive, and likely illegal customer service from Barack’s IRS?

Lest there be any more doubt that we have a very real problem here, consider that Malik is the fourth Obama family member in Kenya who is now implicated in the spread (Da’wa) of Wahhabist Islam.

The three others are Step-Grandmother Sarah, Uncle Sayid, and Cousin Musa, who in 2011 (video translated below), told Al-Jazeera that the Mama Sarah Obama Foundation (MSOF) deceptively diverts its contributions toward scholarships for Kenyan students to attend the most virulent of Wahhabist schools… in Saudi Arabia.

“Citizens of the Moscow suburb of Reutov have witnessed a previously-unseen procession of illegal aliens arrested by police at a local market....