The DHS rushed a report that reads, Monday’s shooting at the Navy Yard in Washington, D.C. currently has “no known connection to terrorism,” according to an early internal Department of Homeland Security document. 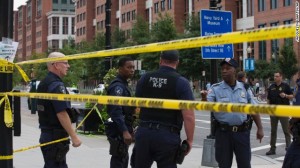 The incident only days after Sept 11, 2001 terrorist attacks on the USA raises suspicions to this attack being the work of Islamic radicals. Reports are stating there is more than one shooter, suggesting this is a coordinated attack by a group of some type of radicals, although it to soon to know just who.

The incident started unfolding at 8:20 a.m. when several shots were fired inside the headquarters for Naval Sea Systems Command in southeast Washington. There are reports of at least four killed in the incident. Approximately 3,000 people work in the building, the Navy said, though it’s unclear how many people were inside at the time of the shooting.

The Washington Navy Yard Has Been the Target of Suspected Terrorist Activities Before In 1983, Washington Navy Yard’s Computer Center was damaged in a bombing. It was part of the Resistance Conspiracy that took place during the 1980s, the most famous of which was the 1983 U.S. Senate bombing.

Ft. Hood shooting also a military insulation, the shooter was Nidal Malik Hassan who was a registered democrat and a devout Muslim. The Obama administration denied any links to terrorism, including his emails to radical Al- Queda Imam, and Hasan own claims that he was motivated by Islam.

It’s too soon conclude this is not homegrown terrorism as the DHS is suggesting. It irresponsible for Homeland Security to make such claims within hours of the shooting, especially after chatter on Islamic sites of promises and warnings of attacks to come.

In Case You Missed It:  Pence Turns on Trump — Will Campaign with Dirtbag Gov. Brian Kemp in Georgia Before Primary
Posted in Terrorism, Tyranny and tagged Eric Holder, Obama, Terrorism.

Now here is a frightening story, as political correctness allows Muslims to screen bags and people at our airports. A...