India’s NDTV was the first news service to capture Hamas men at work. If you set up rocket launchers in civilian areas — especially next to a hotel where journalists are staying — you’re bound to be filmed surreptitiously. NDTV said that reporter Sreenivasan Jain and his crew left Gaza before filing this video. 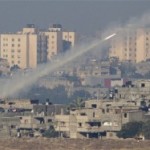 France 24‘s Gallagher Fenwick also discovered a Hamas rocket launching site a mere 50 meters from a hotel where journalists are staying (is it the same hotel as NDTV? ) and 100 meters from a UN facility. No word on whether Fenwick left Gaza before filing this report.

The scene was too neat.

I had just arrived outside the shattered remains of a large mosque in central Gaza City last week. It had been pulverized by an Israeli airstrike. There was rubble, glass and metal everywhere. But on a patch of ground in front of the structure, visible for everyone to see, was a small, dusty carpet.

On top lay piles of burned, ripped copies of the Koran, Islam’s holy book. The symbolism was obvious, almost too perfect. It was clear that someone had placed them there to attract sympathy for the Palestinian cause. A television crew spotted the pile and filmed it. Mission accomplished.

President Obama’s approval ratings continue to plummet. American approval of the president sunk to a new low at 40 percent...