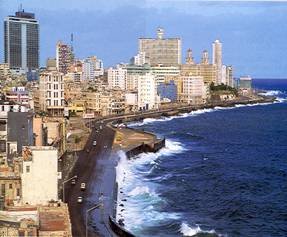 Erdogan’s offer came during a speech in Istanbul to Muslim leaders from Latin America, in which he made the bizarre claim that Muslims discovered America nearly three centuries before Christopher Columbus.

“Muslim sailors arrived in America from 1178,” Erdogan said at the televised address.

“Columbus mentioned the existence of a mosque on a hill on the Cuban coast,” he added, and said that Ankara was even prepared to build a mosque at the site mentioned by the Genoese explorer.

“I would like to talk about it to my Cuban brothers. A mosque would go perfectly on the hill today.”

But according to the Turkish World Bulletin website, the head of Havana’s tiny Muslim community, Pedro Lazo Torres, said that his joint efforts with Turkey’s Religious Affairs Foundation (TDV) to open a mosque in the Cuban capital was rejected by the country’s communist government.

He expressed his disappointment  at the decision, contrasting it to the decision to allow Russia to build at Russian Orthodox church in the country. Cuba’s 4,000 Muslims are currently restricted to praying in private homes.

The TDV’s initiative is reportedly part of a wider drive to build mosques throughout the Caribbean.

Erdogan’s claim of an ancient mosque in Cuba is likely a reference to an article published in 1996, in which historian Youssef Mroueh cites a diary entry from Columbus that mentions a “mosque” “on top of a beautiful mountain” in Cuba. But the diary entry is widely understood as a metaphoric reference to a protuberance on the summit of a mountain that resembles a mosque’s dome or minaret.

A tiny minority of Muslim scholars have recently suggested a Muslim presence in the Americas before Columbus, but no remains of an Islamic structure antedating the discoverer has ever been found.

A young man at the Church of God in Christ (COGIC) 107th Holy Convocation approached the altar asking to be...