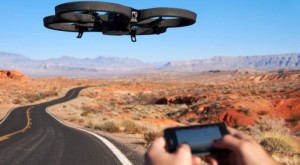 If you want to understand why the government freaked out when a $400 remote-controlled quadcopter landed on the White House grounds last week, you need to look four miles away, to a small briefing room in Arlington, Virginia.

There, just 10 days earlier, officials from the US military, the Department of Homeland Security, and the FAA gathered for a DHS “summit” on a danger that had been consuming them privately for years: the potential use of hobbyist drones as weapons of terror or assassination.

The conference was open to civilians, but explicitly closed to the press. One attendee described it as an eye-opener. The officials played videos of low-cost drones firing semi-automatic weapons, revealed that Syrian rebels are importing consumer-grade drones to launch attacks, and flashed photos from an exercise that pitted $5,000 worth of drones against a convoy of armored vehicles. (The drones won.)

But the most striking visual aid was on an exhibit table outside the auditorium, where a buffet of low-cost drones had been converted into simulated flying bombs. One quadcopter, strapped to 3 pounds of inert explosive, was a DJI Phantom 2, a newer version of the very drone that would land at the White House the next week.

Attendee Daniel Herbert snapped a photo and posted it to his website along with detailed notes from the conference. The day after the White House incident, he says, DHS phoned him and politely asked him to remove the entire post. He complied. “I’m not going to be the one to challenge Homeland Security and cause more contention,” says Herbert, who runs a small drone shop in Delaware called Skygear Solutions.

The White House drone, of course, wasn’t packing an explosive and wasn’t piloted by a terrorist—just a Washingtonian who lost control of the device while playing around in the wee hours. But the gentle censorship directed at Herbert illustrates how serious the issue is to counterterrorism officials.

The Phantom line of consumer drones made by China-based DJI figures prominently in the government’s attack scenarios. That’s not because there’s anything sinister about DJI or the Phantom—in fact, just the opposite. The Phantom is the iPod of drones, cheap, easy to use, and as popular with casual and first-time fliers as with experienced radio control enthusiasts.

With all the attention surrounding the White House landing, DJI felt it had to take action. So last Thursday it pushed a “mandatory firmware update” for its Phantom 2 that would prevent the drone from flying in a 15.5 mile radius of the White House. So far it’s the only drone-maker installing what’s known as GPS geofencing

The technique is not new to DJI. The company first added no-fly zones to its firmware in April of last year to deter newbie pilots from zipping into the restricted airspace over airports, where they might interfere with departing and arriving aircraft. If a Phantom 2 pilot flies within five miles of a major airport’s no fly zone, the drone’s maximum altitude begins to taper. At 1.5 miles away, it lands and refuses to take off again. Municipal airports are protected by smaller zones, also programmed into the drones’ firmware.

For DJI, airport no-fly zones were a response to the growing popularity of the Phantom 2 and perhaps a hedge against the constant threat of increased regulation. “We started seeing the community of pilots grow,” says spokesman Michael Perry, and many users have no idea where they can and can’t legally fly the drone.

“The guy in the White House incident, I’m pretty sure he didn’t know that flying in downtown DC is illegal.” Rather than put the onus on every user to learn local air traffic zoning rules, DJI translated them into code, and added a little buffer zone of its own for added safety.

The White House geofence is only the second one that isn’t centered on an airport, according to Perry—the first was Tiananmen Square. It won’t be the last. Now that the company has perfected the ability to erect geofences at will, the sky’s the limit—or, more accurately, the skies are limited.

DJI is preparing an update that will increase the number of airport no fly zones from 710 to 10,000, and prevent users from flying across some national borders—a reaction to the recent discovery that drug smugglers are trying to use drones to fly small loads of meth from Mexico into the US.

In Case You Missed It:  More than three-quarters of covid deaths in Vermont are among the "fully vaccinated"
Posted in Freedoms and tagged Conservatism, Constitution, Freedom, Governments, US Citizen.

Imam Obama comes out at the National Prayer Breakfast

By Judi McLeod  We can hear it now, much closer than ever before, the Islamic call to prayer, not in...