Hillary must wish we really are “tired of hearing about her damn emails.” But…no. 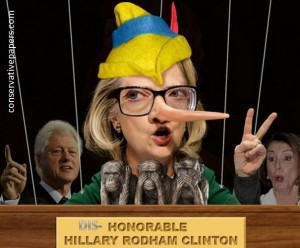 The revelations never seem to end. Among the biggest lie exposed from her emails was related to Benghazi. As it turned out, Hillary was the originator of the false narrative that the attacks were in retaliation to a video – directly contradicting her testimony at the Benghazi Hearings.

Hillary maintains that no classified emails were even sent or received on her personal email, but the State Department released over 3000 of her emails on New Year’s Eve, and that could very well be a lie too. As HotAir reports:

A batch of Hillary Clinton’s private emails that were published Thursday by the State Department included at least one that appeared to have been marked classified when it was written, contrary to Clinton’s longstanding argument that nothing she sent or received was ever marked as such.

The classified message was among 275 emails that were upgraded to fully or partially classified in the latest trove of emails.

The emails included a message from Harold Koh, a State Department legal adviser, that was marked “confidential” both in the subject line and in the body of the email.

It was officially classified as “confidential” by the State Department before being posted online late Thursday afternoon.

Agency officials have argued none of the emails were classified at the time they were written, and that all designations were made in light of information that has emerged since Clinton left office.

Whether or not Hillary is lying hinges on whether or not her emails contained information that was classified after the fact.

Regardless, there are significantly more emails that Hillary hasn’t turned over, and the information contained there could be much more damaging than this one lie.

[Note: This post was authored by The Analytical Economist]

In Case You Missed It:  Here’s what you need to know about chlorine dioxide (ClO2), the “universal antidote”
Posted in Freedoms and tagged Benghazi, Clinton, Crime.

Myth of the ‘Moderate Muslim’

“When the sacred months are over slay the idolaters wherever you find them. Arrest them, besiege them, and lie in...