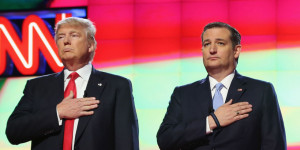 Ted Cruz:O’Reilly asked Trump if he would consider Ted Cruz in his administration? Would you consider that?” asked O’Reilly.

Trump supporters may or may not go along with such a pick, as the fight between Trump and Cruz was nothing short of brutal, but full reversals are nothing new within the Trump campaign. I wouldn’t be surprised to see the Donald of now defy the Donald of 5 minutes ago.

Marco Rubio: Yes, there was that whole “Little Marco” thing. But if Ben Carson can make peace with Trump, then anything can happen. Rubio is clearly in search of a next step in his political career, and while most insiders raise questions about whether he would accept the vice-presidential nomination, it’s still hard for me to imagine anyone turning it down. Rubio could help Trump with outreach to establishment Republicans and in Florida. As a Cuban American, he also might be able to blunt some of Trump’s sharpest edges on immigration and avoid an electoral disaster in the Hispanic community.

Chris Christie: “I think Chris Christie is fantastic,” Trump said Tuesday night as the New Jersey governor (and his wife) stood just behind him onstage. No one has risked more with his support for Trump than Christie, who has been roundly mocked and dismissed by the GOP establishment for the decision. Personality-wise, Christie and Trump seem to be an obvious match. And Trump has said before that he would want a politician as his running mate. From a geographic/ideological standpoint, Christie doesn’t add a ton to the Trump ticket. But who knows if Trump even cares?

John Kasich: Trump has gone on offense against “1-for-41 Kasich” of late, but in general, these two have been on (relatively) friendly terms throughout the race. Kasich would represent an olive branch — of sorts — from Trump to the establishment and might carry the sort of résumé (member of Congress, Midwestern governor) that would appeal to Trump. And Kasich, who is in the middle of his second term, might find the chance at a vice-presidential nomination — even if it meant sharing a ticket with Trump — impossible to resist.

Newt Gingrich:   He might be one of the few actual conservatives willing to assist Trump by serving as vice president. And while Trump will have no problem changing his new positions back to reach non-Republican voters in a general election, it is precisely that inconstancy to conservative principles that would give him serious trouble getting conservative voters to rally behind him.

If working class voters already connect with Trump, what would happen if you give them the guy who’s known for hosting “Dirty Jobs,” a show that praises hard manual labor and working under difficult conditions. Give them the guy who runs a non-profit in support of vocational trades and training. Give them a famous man who has been speaking up for them longer than Trump has. It’s kind of crazy, but so is everything else this year.

In Case You Missed It:  Trump Juice: Why is Trump given a hall pass on killer injections?
Posted in Cruz and tagged Election, President Donald J Trump.

Israel to upgrade ties with NATO

Prime Minister Binyamin Netanyahu said on Wednesday that Israel would upgrade its ties with the 28-member NATO military alliance by opening a permanent...