Democratic pollster Pat Caddell says some of the polling he is seeing is biased and overweighted against Republican presidential nominee Donald Trump.

“I’ve never seen the polls so out of whack,” said Caddell Monday on “The Laura Ingraham Show.” “I mean, so not universal at this stage … The tracking polls all show Trump about even … You have the ABC poll, which is a really distorted sample, of course. Nine points Democratic, which has been seized upon 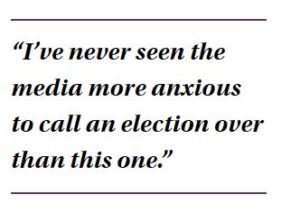 to continue to drive the narrative of this election that it’s over. I’ve never seen the media more anxious to call an election over than this one. Usually, they want to say it’s a contest because they get more attention and they get higher ratings — but not this one.”

The poll had a margin of error of plus-or-minus 3.5 percent.

Most surprisingly, the poll had an odd partisan breakdown of 36 percent of Democrats, 31 percent of independents, and 27 percent of Republicans.

LifeZette Editor-in-Chief Laura Ingraham asked Caddell about “oversampling,” which became an issue last week when WikiLeaks unearthed emails among Democrats talking about inflating poll numbers of key Democratic constituencies. The apparent aim was to get polls to show Democrats outperforming reality to boost excitement in the ranks and depress turnout among Republicans.

Caddell said there are some legitimate reasons for oversampling — but added he suspected oversampling this election season is done to slant numbers against the Republicans.

Some pollsters look for Democrats or Democratic-leaning respondents to inflate their numbers, Caddell said.

Caddell says the race is closer than public polls show.

“I think the [presidential] race is about 2 to 3 points,” said Caddell. “And with a lot of [voters] floating around … The volatility in this electorate is higher than everything I have seen at this late date.”

Project Veritas Action has released the third video in a multi-part series that is sending shockwaves through the DNC...