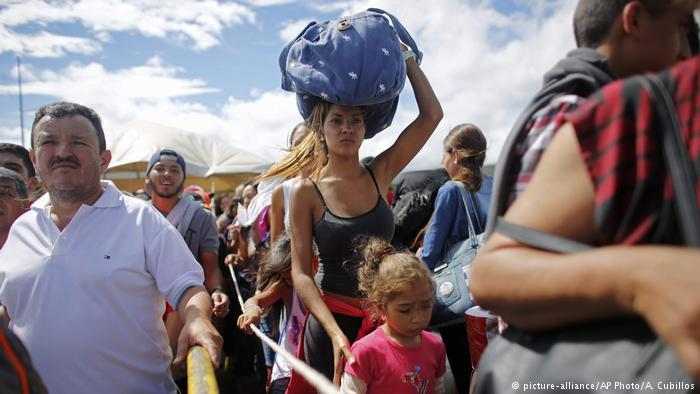 The infamous refugee crisis of 2015 through 2016 was brought about by the American-backed persecution of Christians at the hands of American-supported and many times trained ISIS terrorists. The crisis was used to bring about a wave of serious crime in order to revive nationalism and stir anti-immigrant sentiment, something which targets not only non-Europeans but also people from eastern Europe such as Poland, Lithuania, and Romania. This is preparation for a future war in Europe that will have serious and deadly consequences for the entire world.

A similar situation is repeating in South America with the American-supported and directed overthrow of the sovereign government of Venezuela, where a refugee crisis to all of Venezuela’s neighbors is ensuing on account of the violence according to a report:

Latin American countries are straining to cope with an influx of Venezuelan immigrants, a tide of humanity that is expected to increase in 2019 as the troubled socialist government of Nicolas Maduro clings to power.

Experts now estimate that more than 4 million Venezuelans, or more than 10% of the population, have left their native land since Maduro’s predecessor, Hugo Chavez, took power in 1999. Most of the migrants have settled at least temporarily in neighboring South American countries.

Venezuelans are fleeing a country in the midst of social and economic collapse. “So much there is simply broken,” said Jeffrey Davidow, a former U.S. ambassador to Venezuela.

Worsening conditions — hunger, hyperinflation and violent crime — have pushed the rate of departures higher in recent months. At least 1 million people are thought to have left since November and several receptor nations, including Argentina and Ecuador, report that arrivals doubled in 2018 compared with 2017.

Some nations have extended the welcome mat in sympathy for Venezuelans as victims of a dictatorial and inept government. But others report increasing resentment directed at the newcomers because of their effect on the job market, higher cost of living and perceived criminal activity.

Many Venezuelans say they doubt that they will return to Venezuela anytime soon, even if Maduro leaves office and self-declared interim President Juan Guaido or another opposition politician wins a presidential election and begins the economic recovery process.

“Of course I’m watching what happens in my country with hope and expectation,” said Eliney Perez, 34, an environmental engineering attorney from Venezuela who now helps manage a messenger service in Argentina. “But I have to think of my family.… Emerging from the chaos will take years.”

Here is a country-by-country look at the Venezuelan diaspora:

Venezuelans offered thousands of Argentinians political asylum during the 1976-83 military dictatorship and “dirty war.” Now Argentina is returning the favor.

Argentina is not just welcoming Venezuelans but also helping relocate them to various parts of the country and matching them with jobs. Perhaps as a consequence, arrivals of Venezuelans seeking official residency status jumped to 70,351 last year, more than double the number in 2017, according to Argentine immigration authorities. More than 130,000 Venezuelans now officially live there.

Because both countries belong to the Mercosur trade community, health services and education are free. Access was simplified and guaranteed by a special decree last February. “The case of Venezuela is an exception that was done on humanitarian grounds. The purpose is so they can find work quickly,” Education Minister Alejandro Finocchiaro said.

Attitudes toward Venezuelan immigrants have shifted dramatically under new President Jair Bolsonaro, a right-winger who took office Jan. 1. Days later, he announced that Brazil was pulling out of a U.N. accord covering migrants, reversing the policy of his predecessor, Michel Temer. In November, he said the country needed to take “rigid control” of its border, including the possible construction of refugee camps. “We already have enough problems here,” Bolsonaro had said earlier in the year, referring to the Venezuelans.

Brazil took in 98,000 Venezuelans as semi-permanent residents in 2017 and 2018, according to the U.N. high commissioner for refugees. Those included applicants for refugee status — nearly 38,000 last year, more than double the previous year

Brazil’s Roraima state, on the northern frontier with Venezuela, has seen the tide of migrants overwhelm its health system, with a doubling of the patient population of the general hospital in the state capital, Boa Vista. The few shelters in the region are also overwhelmed. In August, troops were sent to a border city, Pacaraima, when residents attacked a camp and forced 1,200 occupants to return to Venezuela.

Unaccustomed to massive arrivals, Chileans have taken a harder attitude toward the avalanche of Venezuelans in recent months. “Some nationalist discourses have emerged,” said Alvaro Bellolio, head of Chile’s immigration department. “We’ve reached a historical maximum of foreigners.”

A recent survey of Chileans found 75% of those responding thought the number of immigrants was excessive.

One of last year’s arrivals was Pablo Gonzalez Romero, 49, who left a musical career on the Venezuelan island of Margarita to work in Chile as a doorman in downtown Santiago, the capital. “I came to be with my children,” he said. “I didn’t want to leave Venezuela, but I wanted to get away from the violence.”

Colombia shares a 1,300-mile border with Venezuela and has received the largest number of migrants. Nearly 1.2 million Venezuelans are thought to be living in the country, said Christian Kruger, the director of Migration Colombia, an arm of the Foreign Ministry. About 600,000 have received work permits.

Although the majority live in big cities such as Bogota, Medellin and Cali, thousands of immigrants have found seasonal jobs picking coffee, a crop that has been imperiled by severe labor shortages in recent years. Farm labor wages of $350 a month compare favorably with wages of under $10 a month for similar jobs in Venezuela.

Colombia has reached out to the international community for help in dealing with the deluge of Venezuelans. Hospitals and elementary schools in the border city of Cucuta have been overwhelmed, and administrators complain about the central government’s failure to reimburse them for the cost of caring for migrants. The U.S. Agency for International Development, or USAID, has promised $30 million in assistance.

Still, Colombia continues to go an extra mile to accommodate its neighbors. This month, presidential border czar Felipe Munoz announced a plan to offer Venezuelans easier access to opening bank accounts as a means of ensuring “economic stability” and “formal integration to the financial system.”

With an overall population of about 16 million, Ecuador has felt the impact of the estimated 320,000 Venezuelans who have entered the country in recent years, according to the Venezuelans in Ecuador Foundation. For many Venezuelans, Ecuador’s appeal lay in its easy entry: Visitors from any country could enter without a visa.

But anti-immigrant sentiments jumped last month when a Venezuelan allegedly stabbed to death his pregnant Ecuadorean girlfriend, Diana Ramirez Reyes, in front of police and horrified residents of the city of Ibarra.

A week later, President Lenin Moreno decreed a tougher immigration policy that requires incoming Venezuelans to present a document certifying they had a clean criminal record in Venezuela. Migrant rights advocates say the requirement in effect shuts out new arrivals from living legally in Ecuador, because such documents are costly to obtain in Venezuela, if available at all.

Although she feels grateful to Ecuador for giving her refuge, domestic worker Yajaira Rodriguez, 37, who arrived in Quito, the capital, in April from Barinas, Venezuela, said Reyes’ death was a turning point.

“Now there are more obstacles to find work, to obtain official papers and to rent a place, because if you are Venezuelan, they deny you,” Rodriguez said.

Peru was the initial “promised land” for many Venezuelans who sought new lives. Reports of plentiful work opportunities and easily available special work permits made it seem unusually attractive. From February 2017 through last December, Peru issued 495,000 of the special permits.

But Peru’s hospitality has its limits. The entry of 535,000 Venezuelans last year — not all stayed — was a severe test. The work permits are not renewable, and last year the country decided to stop issuing them.

Wilfredo Arceno, 37, is ambivalent about his new home. A business manager in his native Aragua, Venezuela, he now works in Lima driving passengers on his motor scooter and earning about $15 a day, barely enough to support his wife and two sons, ages 17 and 12.

He appreciates that Peru made it possible to start working immediately upon arrival in 2017. But he worries about the future. “I’m feeling the resentment of Peruvians toward foreigners and that makes life hard,” Arceno said. (source, source)

This “crisis” will be important to watch because it will have major political implications for all of South America, and could even spread to the US. Indeed, just as there were “migrant caravans” from Honduras, one should not be surprised to see something “similar” from Venezuela, and in so doing should expect to hear the same political rhetoric. Given that President Bolsonaro of Brazil, a friend of Trump and a man who has shown open sympathies for nationalism and ties to such groups, a crisis such as this may be a unique political opportunity and another gift from Trump to him that will be used to bolster US interests in the Southern Hemisphere.

In Case You Missed It:  Mass chicken culling based on “avian influenza outbreaks” just another malicious attack on the FOOD SUPPLY
Posted in Freedoms and tagged Migrants, Venezuela.

3 Lessons From the Jussie Smollett Hoax

So, Jussie Smollett was lying. The “Empire” actor claimed that when he was walking home at 2 a.m. in Chicago,...