US President Donald Trump announced via Twitter that he has postponed his trip to Copenhagen, Denmark, due to Danish Prime Minister Mette Frederiksen’s statement that she has “no interest” in selling Greenland.

The trip had been scheduled after Trump and his wife, First Lady Melania, accepted an invitation to visit Her Majesty Margrethe II, Queen of Denmark. The trip was also to have included bilateral meetings and meetings with businessmen.

“Denmark is a very special country with incredible people, but based on Prime Minister Mette Frederiksen’s comments, that she would have no interest in discussing the purchase of Greenland, I will be postponing our meeting scheduled in two weeks for another time,” Trump tweeted Tuesday night.

“The Prime Minister was able to save a great deal of expense and effort for both the United States and Denmark by being so direct. I thank her for that and look forward to rescheduling sometime in the future!”

A White House official confirmed to CNN that the entire trip to Denmark has been canceled. 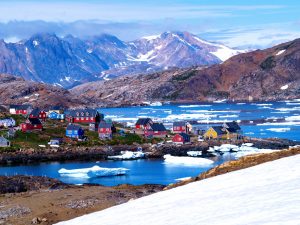 “We are good allies with Denmark. We protect Denmark like we protect large portions of the world, and the concept came up. Strategically it’s interesting, and we would be interested, but we will talk with them a little bit,” he said.

Sermitsiaq quoted Frederiksen’s response: “Greenland is not for sale. Greenland is not Danish. Greenland belongs to Greenland. I strongly hope that this is not meant seriously.” She added that the whole thing was “an absurd discussion.”

“Thankfully, the time where you buy and sell other countries and populations is over. Let’s leave it there.” She added: “We will of course love to have an even closer strategic relationship with the United States.”

In 1946, the US offered to purchase Greenland from Denmark to the tune of $100 million. Later, the US set up its Thule air base in northern Greenland, for use as a refueling base for long-range bombers.

In Case You Missed It:  Our Growing China Problem
Posted in Financial and tagged Denmark, Financial, President Donald J Trump.

A Day to Resolve to Fight Religious Persecution

In a breakthrough for global advocacy of religious freedom, the United Nations this year established Aug. 22 as the International...