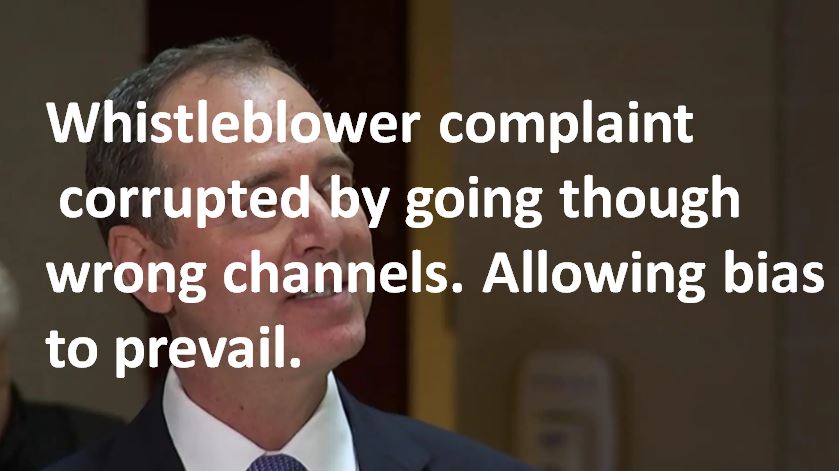 intelligence community (IC) seeking to report possible government malfeasance by going to the Democrat head of the House Intelligence Community before the IC inspector general (IG).

The Democratic head of the House Intelligence Committee, Representative Adam B. Schiff of California, learned about the outlines of a C.I.A. officer’s concerns alleging that President Trump had abused his power days before the officer filed a whistleblower complaint, according to a spokesman and current and former American officials.

However, the Intelligence Community Whistleblower Protection Act (ICWPA) of 1998 explicitly requires an official concerned about wrongdoing within the government to go to the IC inspector general before the congressional panels in charge of oversight of the intelligence community.

Under a section titled, “Summary of Procedures for Reporting Urgent Concerns Pursuant to the ICWPA,” the official Director of National Intelligence (DNI) website states:

Investigators from the office of the IC IG are expected to operate independently of political leadership in government to keep partisan politics out of any possible claims.

The whistleblower released second hand information behind a July 25 call between President Trump and his Ukrainian counterpart Volodymyr Zelensky.

According to the whistleblower, the U.S. commander-in-chief abused his power by urging Zelensky to investigate former American Vice President Joe Biden and his son Hunter’s ties to crimes in Ukraine.

Trump denies the allegations. The July call, however, is now at the center of the impeachment proceedings that House Democrats are pursuing.

In Case You Missed It:  Democrats To Another Set of Articles of Impeachment – Will Formally Introduce on Monday
Posted in Tyranny and tagged Democrats, Impeachment.

Maduro May Get Seat on UN Human Rights Council; ‘Perfect Example’ of Why US Withdrew

(CNSNews.com) – With Nicolás Maduro’s regime in Venezuela likely to be handed a seat on the Human Rights Council in...