Unless Democrats and their henchmen come to the unlikely understanding they also must preserve our laws and traditions, the country will be heading for a bloody disaster, and civil war will be upon us

With the 2020 election only months away, it is reasonable to wonder whether the election could spark widespread violence nationwide.  With a probable hung election and accusations flying left and right, we may be approaching the time in 1860 when the election became a choice of whether a divided country could stay united.  This election could trigger full-scale violence beyond anything we have seen so far.  No, this won’t be just another election.  It may be our Fort Sumter.

Both left and right detest each other, and with no resolution in sight, things could get ugly.  With China on the march, COVID in the air, and racial unrest in the streets, the mix could not be worse and may finally boil over.  What has been a cold civil war up until now could very well go hot.

Worse still, the election will probably not be resolved on November 3.  As the vote goes into overtime with counting and recounting ballots, many of them fraudulent, the far-left anarchists will take to the streets, burn down buildings, and reach deeper into suburban strongholds of republicanism.  The police may or may not side with the mobs as private citizens try as best they can to protect their property, often armed with a gun.

As we approach the November elections, the probability is increasing of the current low-intensity battle between the left and traditional Americans boiling over into full-scale insurgency.  If Donald Trump wins the election, the left will probably double down on the violent “resistance” they have been pushing since 2016.  If Joe Biden wins, the left will undoubtedly enact legislation that would destroy the republic and enslave the citizenry touching off a revolt by the right.  Conservative patriots will fight to save the republic and the future of the nation.  Either way, violence looms.

It is not inevitable, but all true patriots need to be ready to stand firm for our American heritage.  The costs of blood could be high.  This could be war.  And unlike other wars in our past that respected innocent civilian lives, it would likely become an ugly guerilla war on the streets of our cities doing irreparable harm to innocent bystanders.

The battle on the left will be waged by Black Lives Matter (BLM), Antifa thugs, and their deep-state supporters.  For them, innocent victims and killings are not atrocities, but a piece of their broader scheme to remake America into their utopian socialist ideal.  Their goal is to topple our constitutional system and deprive us of our liberties, property, and way of life.

Much of the rioting centers on the belief America is a racist nation.  Many people righteously march to give the black community their support.  However, the BLM organization isn’t concerned with black lives.  BLM has raked in millions in funding from corporations and people just trying to do the right thing.  In reality, these supporters are being played as chumps to funnel money to ActBlue who in turn finance Democrat candidates and the most liberal subversive groups in America today. 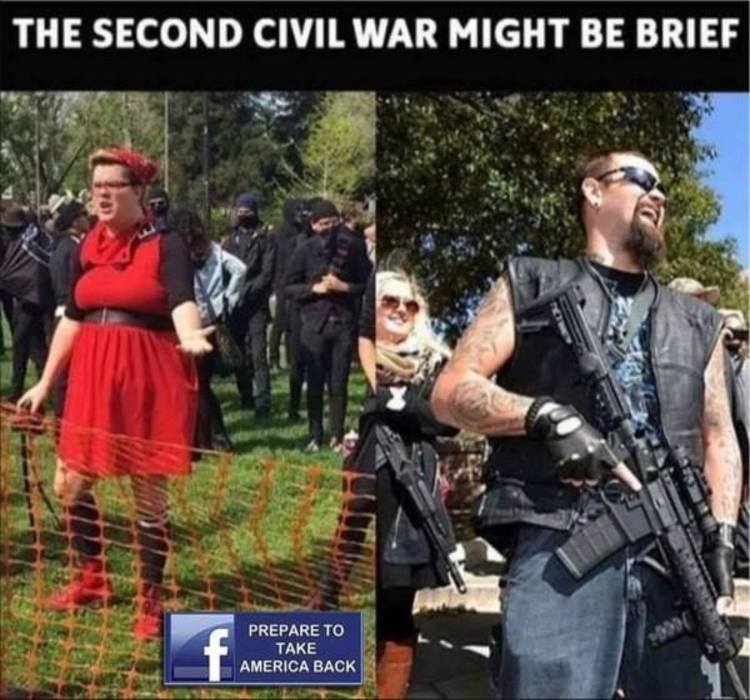 Democrats and their friends in the mainstream media broadcast that the gangs causing the destruction and violence are non-violent as they are looting and lighting fires to a police station.  They justify it as an unfortunate response by downtrodden victims of a debased and immoral nation.  Yet, at the same time, they seek to deprive the public at large of their First Amendment rights to speak and worship freely, and Second Amendment rights to defend themselves with firearms.  Do not be deceived.  Vast numbers of Americans will protect those rights with their lives if need be.

Conservatives did not agree with Barack Obama while he was in office, but they accepted him as president because they realized he was the people’s choice and was duly elected.  The left has never given and will never give Trump the same courtesy.  Donald Trump was duly elected as president, but there has been nonstop treasonous resistance against him since the day he was elected.  We can only expect more of the same if he is reelected.

Blaming an open civil war on Donald Trump will be like blaming the American Civil War on Abraham Lincoln.  In both cases, the forces had been on a collision path for years before the conflict, and it reached its culmination during the time these two great men were in office.

The warning lights of a collapse of civil order have been coming for a long time and could be fully triggered this November.  If elected officials at all levels are incapable of gathering the will to protect our most essential ways of life from thuggery and incendiary accusations of racism, then they have abandoned their official duties to the mob.  Trump understands his obligation to keep order and the rule of law.  Unless Democrats and their henchmen come to the unlikely understanding they also must preserve our laws and traditions, the country will be heading for a bloody disaster, and civil war will be upon us.

In Case You Missed It:  CDC Director Walensky Says Updated Covid Guidance Based on What Agency “Thought People Would be Able to Tolerate” (VIDEO)
Posted in Freedoms and tagged Revolution, United Socialist States of America.

To the President: Let’s Open the Churches!

There is no denying the direct correlation between the closing of churches and the outbreak of violence By David Martin Mr....