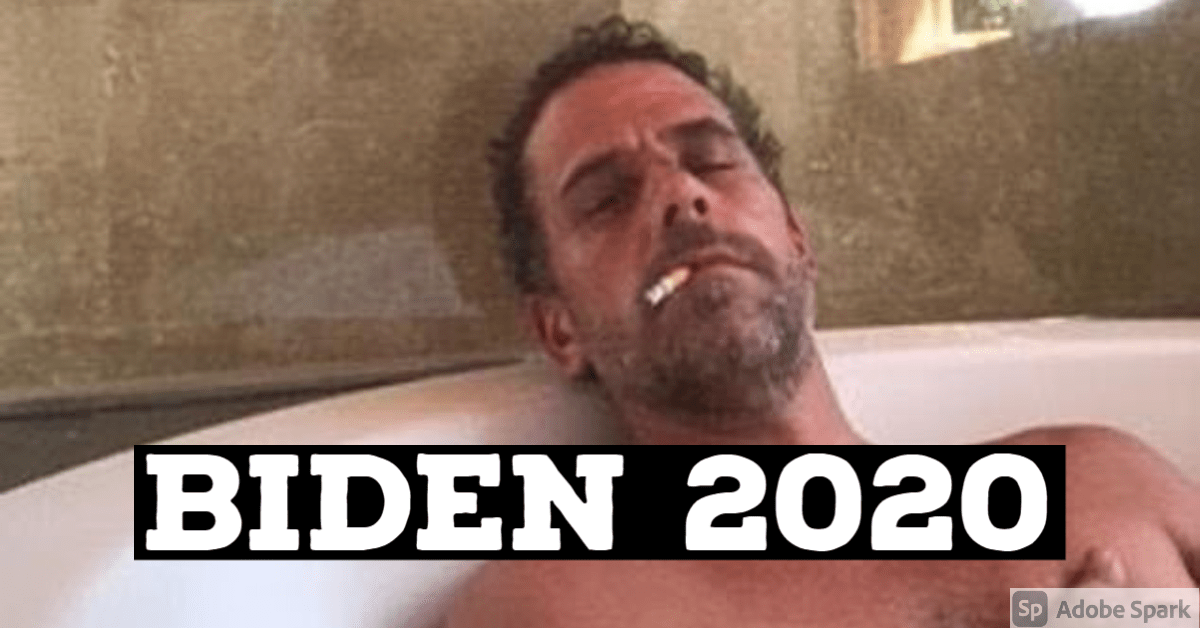 There are some things in life that are generally bad decisions. These include but are certainly not limited to corrupt business deals with questionable foreign powers while holding a position of power or influence, smoking crack or other mind altering drugs, and fornication with loose women or prostitutes. Combining any of these things tends to amplify the effects of the other bad decisions, makine what is bad become potentially far worse.

Such is the case that has recently transpired with Hunter Biden, for he was found in videos with supporting emails smoking crack, fornicating with unidentified women, and making corrupt business deals with foreign businessmen as the House Republicans report.

An earlier email from May 2014 also shows Pozharskyi, reportedly Burisma’s No. 3 exec, asking Hunter for “advice on how you could use your influence” on the company’s behalf.

The blockbuster correspondence — which flies in the face of Joe Biden’s claim that he’s “never spoken to my son about his overseas business dealings” — is contained in a massive trove of data recovered from a laptop computer.

The computer was dropped off at a repair shop in Biden’s home state of Delaware in April 2019, according to the store’s owner.

Other material extracted from the computer includes a raunchy, 12-minute video that appears to show Hunter, who’s admitted struggling with addiction problems, smoking crack while engaged in a sex act with an unidentified woman, as well as numerous other sexually explicit images.

The customer who brought in the water-damaged MacBook Pro for repair never paid for the service or retrieved it or a hard drive on which its contents were stored, according to the shop owner, who said he tried repeatedly to contact the client.

The shop owner couldn’t positively identify the customer as Hunter Biden, but said the laptop bore a sticker from the Beau Biden Foundation, named after Hunter’s late brother and former Delaware attorney general.

Photos of a Delaware federal subpoena given to The Post show that both the computer and hard drive were seized by the FBI in December, after the shop’s owner says he alerted the feds to their existence.

But before turning over the gear, the shop owner says, he made a copy of the hard drive and later gave it to former Mayor Rudy Giuliani’s lawyer, Robert Costello.

Steve Bannon, former adviser to President Trump, told The Post about the existence of the hard drive in late September and Giuliani provided The Post with a copy of it on Sunday.

Less than eight months after Pozharskyi thanked Hunter Biden for the introduction to his dad, the then-vice president admittedly pressured Ukrainian President Petro Poroshenko and Prime Minister Arseniy Yatsenyuk into getting rid of Prosecutor General Viktor Shokin by threatening to withhold a $1 billion US loan guarantee during a December 2015 trip to Kiev.

“I looked at them and said: I’m leaving in six hours. If the prosecutor is not fired, you’re not getting the money,” Biden infamously bragged to the Council on Foreign Relations in 2018.

Shokin has said that at the time of his firing, in March 2016, he’d made “specific plans” to investigate Burisma that “included interrogations and other crime-investigation procedures into all members of the executive board, including Hunter Biden.” (source)

This is terrible for Biden, and his campaign may be up in smoke.

What you have here is not mere ‘corruption’, but essentially the same kind of ‘Russian collusion’ that the Democrats were accusing Trump of for years but now turned back on them in the final weeks of the next presidential election. Likewise, if that is not enough, these photos and the emails with associated evidence are likely enough to bring significant criminal charges not just to Hunter, but the senior Biden himself because of direct evidence showing collusion with foreign governments.

This is not even secret, but openly pushing, and for practical purposes completely throwing, the election to Trump’s favor. Indeed it is quite interesting that this video emerged as another “October Surprise”.

However, this should also be taken as a warning sign, because if the trends continue as they are, the Democrat party will likely have a collapse in her leadership, but since her base is present and not going anywhere, not only will it be easy for them to rebuild over the next four years, but they will likely come back in 2024 much stronger than before. Beware of this event, for while it may spell the temporary success of the Republican party, it may also speak to their greater downfall.

By Theodore Shoebat The anti-Christian nature of the war against Armenia is already revealing itself as Azerbaijan just recently bombed...