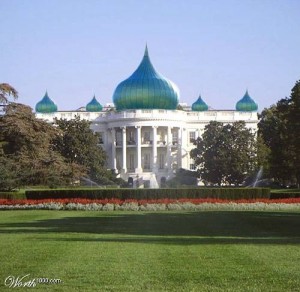 What would the U.S president be like if we had a Muslim President in the White House? What would he do? Would he ignore Christian holidays such as the National Day of Prayer, yet celebrate Ramadan, and certainly they would never attend church services while in office.

Maybe he would commit our military forces to defend Muslims in foreign countries such as Libya? Maybe he, his Vice President and Secretary of State would declare that Muslim terrorist organizations are not our enemies? How about allowing Muslims to build a shrine on the site of the World Trade Centers attack?

Maybe this President would declare that we in the United States are no longer a Christian nation? How about declaring that the US is the largest Muslim nation in the world?

A Muslim president would recognizing the observance of major Muslim holidays and released statements on Ramadan, Eid-ul-Fitr, Hajj, and Eid-ul-Adha but forget to mention both Good Friday and Easter.

A Muslim president would say nominate people named something like Dalia Mogahed to sit on their Advisory Council that openly support Shania law and claim westerners do not understand it.

A Muslim president may classify terror acts, such as the Fort Hood terror massacre as ‘workplace violence’ rather than Islamic terrorism, despite clear links to radicals.

A Muslims president may pass a law in his fist days in office to provide rights to terrorist captured trying to kill American soldiers the right to trials in US courts verses military tribunals, rights not even afforded to our Military personnel.

A Muslim president would refer say four times in a speech to referencing Quote: “The Holy Koran.” As well as using the Islamic term ‘peace be upon them” when referring to the “children of Abraham” including Mohammad.

A Muslim president could possible have his secretary of state working on such laws to limit freedoms such a laws to limit speaking negatively about Muslims or Islam.

A Muslim president could order the NASA administrator to pursue new objectives: such as specific requirments to “reach out to the Muslim world.”

A Muslim presdent could have a funny sounding Islamic name say like Barack Hussein Obama..

Americans this is the short list of a Muslim President, truth is Obama already has done all these things.

In Case You Missed It:  “One Of Those ‘A-Ha!’ Moments” — Dr. Zelenko On How He Developed His Z-Stack Approach
Posted in Terrorism, Tyranny and tagged Fort Hood, Islam, Muslim Brotherhood, Muslims, Obama, Terrorism, United Socialist States of America, White House.

Why Obama’s Socialism Will Fail

Socialism is the Big Lie of the twentieth century. While it promised prosperity, equality, and security, it delivered poverty, misery,...