During a recent televised debate, a French-Moroccan Imam lashed out at Hamas for using civilians as human shields.

The Imam, Rachid Birbach, said that Gazans were caught between a rock and a hard place: between the Israeli 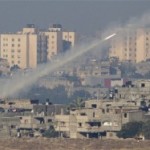 bombardments and the “even more terrible” abuse and siege by Hamas.

“We reject extremism, be it Islamic or Israeli extremism,” he said in the debate, which aired on France 24 TV on July 24 and was translated by the Middle East Media Research Institute (MEMRI).

“I cry my heart out at night over the [plight] of the Palestinians, but unlike those who say that this is an Israeli-Palestinian conflict, I say that it is a conflict between Israel and Hamas. We must understand this,” said Birbach.

“I don’t understand why Hamas opposes peace in such an insane manner. They reject this. When Egyptian diplomacy intervened and proposed a ceasefire, Hamas rejected it,” he added.

“I’d like to make myself clear: I support Gaza and Palestine. I am against oppression. The Palestinian people are caught between a rock and a hard place: between the Israeli bombardments, on the one hand, and the abuse and siege by Hamas, on the other hand – and the latter is even more terrible. Hamas has been using them as human shields,” he said.

Hamas has openly boasted about the “success” of its strategy of using civilians as human shields during Operation Protective Edge, and the IDF has published extensive evidence of the practice.

By contrast, the IDF has dropped leaflets, sent phone messages, and issued general warnings to all civilians within range of upcoming airstrikes to prevent further harm.

In Case You Missed It:  9-11-2001 NEVER FORGET
Posted in Israel, Terrorism and tagged Hamas, Terrorism.

IDF forces in the Gaza Strip found a Hamas manual on “Urban Warfare,” which belonged to the Shuja’iya Brigade of Hamas’...