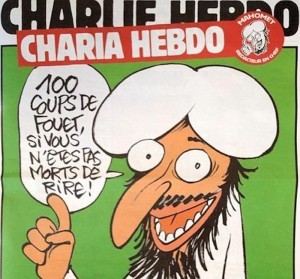 As the Islamic jihadists Said Kouachi and Cherif Kouachi murdered twelve people in the Paris offices of the satirical magazine Charlie Hebdo, they screamed “Allahu akbar,” and one of them shouted, “We have avenged the prophet Muhammad.” They thus made it clear that they were enforcing the Sharia death penalty for those who insult Muhammad, and acting to frighten people into refraining from future criticism or mockery of Muhammad.

Barack Obama endorsed this goal, if not the Charlie Hebdo jihadis’ means of attaining it, when he said in 2012 that “the future must not belong to those who slander the prophet of Islam.” The ordinary understanding of slander in the West is that it involves making false charges that defame another person. But a manual of Islamic law endorsed by al-Azhar, the most influential institution in Sunni Islam, defines slander as “to mention anything concerning a person that he would dislike” (Umdat al-Salik r2.2). Nothing is said about whether or not what is said is true — only that the person would dislike it.

In the wake of the Charlie Hebdo jihad attack, some key Western leaders and media outlets immediately fell obediently into line, carefully avoiding saying anything about Islam or jihad that even the most terror-inclined Muslims would dislike, and thereby giving the Paris jihadis exactly what they wanted. Here are the most egregious capitulators:

Earnest said Thursday that the U.S. was going to “redouble” efforts to get the message out about the true, peaceful Islam, as opposed to the violent, hijacked version. He noted that,

there are some individuals that are using a peaceful religion and grossly distorting it, and trying to use its tenets to inspire people around the globe to carry out acts of violence.

And we have enjoyed significant success in enlisting leaders in the Muslim community, like I said, both in the United States and around the world to condemn that kind of messaging, to condemn those efforts to radicalize individuals, and to be clear about what the tenets of Islam actually are. And we’re going to redouble those efforts in the days and weeks ahead.

This is a great idea. The White House should indeed redouble its efforts to explain what the Qur’an and Sunnah actually say. If it did this honestly, this would lead to a massive change in its foreign and domestic policies. What’s the downside?

But of course the problem with this is that the White House is enveloped in a fog of willful ignorance about Islam’s texts and teachings, and Earnest here is only saying that they’re going to redouble their efforts to thicken that fog, further shielding Muslims from any critical examination of how the teachings of the Qur’an and Muhammad incite violence.

It might seem odd to say that this plays into the hands of the likes of the Charlie Hebdo jihadis, who obviously don’t believe that Islam is a Religion of Peace. However, it is very likely that even though they don’t believe that, they want you to – for then you will be ignorant and complacent in the face of the advancing jihad, instead of preparing defensive strategies. Slander, remember, in Islam is “to mention anything concerning a person that he would dislike.” Thus in pushing the Obama Administration’s rainbows-and-unicorns fantasy of a peaceful Islam, Earnest is protecting the religion from slander, which is just what the Kouachi brothers thought they were doing when they started killing people in the Charlie Hebdooffices.

Libertarian leader Ron Paul on Wednesday brushed aside the jihadis’ claim to have “avenged” Muhammad and blamed France’s foreign policy for the Charlie Hebdo attack:

France has been a target for many, many years, because they’ve been involved in foreign affairs in Libya, and they really prodded us along in — recently in Libya, but they’ve been involved in Algeria, so they’ve had attacks like this, you know, not infrequently. So, it does involve, you know, their foreign policy as well…. I put blame on bad policy that we don’t fully understand, and we don’t understand what they’re doing because the people who are objecting to the foreign policy that we pursue.

Paul gives the jihadis what they want by blaming the West for the actions of the jihadis, thereby feeding the jihadist narrative of grievance, and making future concessions from the West all the more likely.

On the day of the Charlie Hebdo jihad attack, de Mazière hastened to foreclose on any examination of how Islamic texts and teachings (particularly its blasphemy law) may have incited the attack:

The extremist Islamism, Islamist terrorism, is something quite different from the Islam. And this differentiation is urgently needed just on a day like today.

Indeed. Not to make such a distinction would be to “slander the prophet of Islam” – as did the Charlie Hebdo cartoonists.

I think we need to understand here, there, there has to be the ability for people to be critical of other religions, of other ideas and whatnot. There has to be that ability. At the same time, look, we have to also respect Islam and we should not deliberately go out and poke our fingers in other people’s eyes, you know? There is — everyone should have the right to critique Islam, but at least we should do it with some sense of respect so that people don’t get the idea that this is Islamophobia, that it’s racism, that this is exactly the same kind of critique or analysis that we would apply to Judaism, Christianity, Hinduism, any other philosophy out there, that look, it’s worthy of critique and debate.

Kohlmann is correct when he says that Islam should be accorded the same respect that is accorded to Judaism, Christianity, Hinduism, etc., but why is respect required at all? Why is one required to respect any and all ideas and belief systems? Why are there never any mainstream media calls to respect Christianity or Judaism or any other religion? No one is ever worried that “Piss Christ” or the dung-encrusted Virgin Mary painting is poking Christians in the eye. And does Kohlmann think that atheists should not be free to call all of them dangerous nonsense?

In any case, it was to secure respect for Islam, and its freedom from mockery, that the jihadis killed twelve people in Charlie Hebdo’s offices Wednesday.

Erik Wemple reported in the Washington Post Wednesday that Fox, CNN, NBC News, MSNBC, and CNBC had opted not to show the cartoons that so offended Said Kouachi and Cherif Kouachi that they committed mass murder. (Fox did end up showing them.) In an editorial, the Financial Times called for Sharia self-censorship, declaring: “Some common sense would be useful at publications such as Charlie Hebdo.” The New York Daily News showed a photo of Charlie Hebdo’s slain publisher holding up one of the cartoons, but pixelated out the cartoon. Most mainstream media outlets declined to show the cartoons.

This was, of course, exactly what the jihadis wanted: they wanted people to be too afraid to transgress against Islam’s blasphemy laws. The future does indeed not belong to those who slander the prophet of Islam, and that future is now.

While 40 ‘world leaders’ were preening before cameras with linked-arms, during their highly flamboyant “Je suis Charlie!” march in Paris...