The news of Muslim sex attacks is being censored, whitewashed, and covered up. In Germany, the attacks were coordinated — that was a New Year’s jihad-terror attack.

Photo: One of the victims of the Stuttgart attack. (Photo from Facebook).

Finnish police reported Thursday an unusually high level of sexual harassment in Helsinki on New Year’s Eve and said they had been tipped off about plans by groups of asylum seekers to sexually harass women.

Helsinki deputy police chief Ilkka Koskimaki told AFP: “There hasn’t been this kind of harassment on previous New Year’s Eves or other occasions for that matter… This is a completely new phenomenon in Helsinki.”

Security guards hired to patrol the city on New Year’s Eve told police there had been “widespread sexual harassment” at a central square where around 20,000 people had gathered for celebrations.

At least six women have reported Cologne-style sexual harassment and molestation while celebrating the New Year in Zurich, according to local news sources.

Although information from the Swiss city has been less detailed than what is now known about the rapes, sexual harassment, and theft in German city centres, the victims have apparently reported men who were “dark skinned” to be the perpetrators.

It is not yet known if the Zurich sexual assaults have been committed by recently arrived migrants, as is believed to be the case in Cologne, but the news of the epidemic of sexual attacks now seems widespread across Europe and not simply confined to Germany.

Earlier, Finnish authorities reported that a similar scenario had been seen in Helsinki, citing an unusually high level of sexual harassment.

Helsinki deputy police chief Ilkka Koskimaki told AFP of some of the attacks reported, noting: “Police have… received information about three cases of sexual assault, of which two have been filed as complaints,” Helsinki police said in a statement.

“The suspects were asylum seekers. The three were caught and taken into custody on the spot,” Koskimaki told AFP.

Despite public reluctance, and increased parliamentary representation for anti mass migration Swiss People’s Party – which is the largest party in the country – Switzerland still agreed to take 1,500 “refugees” as part of a European Union resettlement plan at the tail end of 2015.

The nation has been criticised by the United Nations refugee agency for being too strict on immigration, but the latest news will no doubt vindicate the government’s stance and lead to a further hardening of public sentiment towards migrants.

The massive influx into Europe of young, unaccompanied men will lead to a gender imbalance and more sex attacks like those seen in Cologne, a professor has warned.

We might look back and say the last day of 2015 was the start of the new dismal future of Europe.

German Chancellor Angela Merkel has said that Germany must examine whether it has done enough to deport foreigners who commit crimes.

Eight days after all this happened, we are not allowed to say these were migrant gangs with no respect for white women.

The media recently admitted these were men of North African or Arab appearance.

In time they will say race was not the issue. Just as the police did in Rochdale before the mass grooming of white kids was finally revealed. By nine Asian men.

We are still supposed to buy into the big multicultural ideal which dictates we should welcome migrants with open arms, blow whistles and applaud them as they descend from trains with their iPhones and expectations.

It is important for everything that happened there to be put on the table.

‘There are some very serious questions which arise from what has happened which have relevance beyond Cologne,’ she said, including establishing whether there are common patterns of behaviour by some groups of people who do not respect women.

Pathetic police forces of Cologne lied about the violence in their city, said the night passed off peacefully and later blamed the women for their rape.

Europe turned on its own and the medieval instincts of a migrant culture won.

Perhaps we will look back in 2016 and acknowledge this was the moment when civil war in Europe became a real possibility. 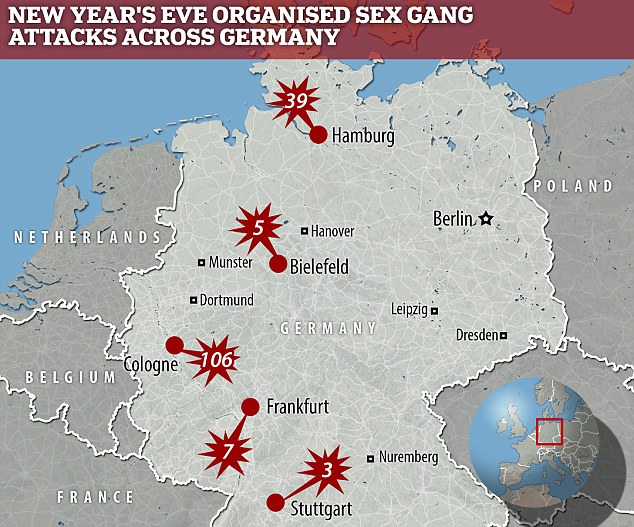