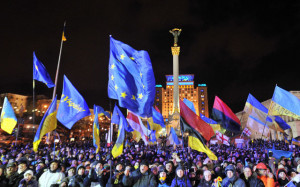 On December 23rd, Gallup headlines “Ukrainians Disillusioned With Leadership,” and reports that “nearly nine in 10 Ukrainians (88%) say corruption is widespread in their government, and about eight in 10 (81%) see the same widespread problem in their country’s businesses.” 8% of Ukrainians now say they “have confidence … about the national government.” 17% approve of the job-performance of their President, Petro Poroshenko. While the pre-coup President, Viktor Yanukovych, was in office, 2010-2014, that figure had been averaging about 23%, and was never as low as Poroshenko’s is now.

Gallup reports, “fewer Ukrainians now say their leadership is taking them in the right direction than before the revolution,” but that statement calling this coup a ‘revolution’ embodies the propaganda-lie of one of Gallup’s main clients, the U.S. government itself, which calls the U.S. coup in Ukraine in February 2014 a “revolution,” when every honest and knowledgeable person now knows that this U.S. government claim — that it had helped install democracy instead of having ended it in Ukraine on 20 February 2014 — to have been a lie. Even the founder of the “private CIA” firm Stratfor has called the overthrow of Yanukovych “the most blatant coup in history.” It had been that because it was the first coup to be videoed by numerous people from many different angles with their cellphones and by TV cameras, uploaded to the Web by even anti-Yanukovych countries such as the UK’s BBC; and those videos, the best compilation of which is here, make clear that this was, indeed, a coup d’etat, no authentic revolution at all, such as the U.S. government claims.

Furthermore, the EU’s investigator who had been assigned to report to their Foreign Affairs Minister Cathy Ashton about the overthrow, reported to her that it had been a coup, and that even Petro Poroshenko himself said that “our” side — meaning the anti-Yanukovych people, had done it. Subsequently, evidence came to light showing how it had been organized: the organization for it had started in the U.S. Embassy in Kiev by no later than March 2013. Then, after all of that preparation, on 4 February 2014, the U.S. State Department’s Victoria Nuland gave the final instruction to the U.S. Ambassador in Kiev, to have Arseniy Yatsenyuk appointed to run the country after the coup, and he became appointed 18 days later, on 22 February 2014, to run the country as Prime Minister, until a new President would be elected ‘democratically’; but, even the election of President Poroshenko on 25 May 2014 was no democratic event, because the U.S. government didn’t want residents in the area of Ukraine that had voted over 90% for Yanukovych to be voting in that election. That area of Ukraine (which historically had been a part of Russia) was called Donbass, and it had no say whatsoever in determining Ukraine’s President after the coup, because the new coup-imposed Ukrainian government was already bombing it, starting on 9 May 2014. None of this could have happened without that ‘revolution’: U.S. President Barack Obama’s very bloody coup in Ukraine.

Here is the man whom the U.S. Ambassador in Kiev, Geoffrey Pyatt, worked with to organize the coup (or ‘revolution’), the co-founder of one of the two racist-fascist, or ideologically nazi, political parties in Ukraine. But Pyatt’s appointee (Andriy Parubiy) left the coup’s gun-play and military planning to that man’s paramilitary friend (Dmitriy Yarosh) who had founded the other of the two Ukrainian nazi parties.

And then, right after the coup, America’s stooge who now was running Ukraine for the U.S. regime, Arseniy Yatsenyuk, installed leaders of Ukraine’s two rabidly anti-Russian racist fascist or nazi partiesinto all of the top internal security and military positions, in order to carry out what they called the ‘Anti Terrorist Operation’ (ATO), or program to exterminate and drive out the residents of Donbass. The prestigious fascist U.S. think tank, the Brookings Institution, urged Obama to increase the firebombings of Donbass, but he decided not to follow that advice, at that particular time.

Obama wants ultimately to base American nuclear missiles in Ukraine on Russia’s border (much like the Soviet dictator Nikita Khrushchev had unsuccessfully tried to do to America in the 1962 Cuban Missile Crisis), and this coup and ethnic-cleansing (to make the coup-regime stick) is how he goes about achieving his goal. Perhaps the next U.S. President will succeed in it. The entire plan had started under U.S. President George Herbert Walker Bush, in 1990; and every U.S. President since then has advanced it further. The United States, ever since around 1980, hasn’t been a democracy; it’s a dictatorship. That’s why it does things like this.

Back in June 2014, shortly after Poroshenko became Ukraine’s President, a Gallup poll in Ukraine taken for the U.S. government showed (p. 27) a geographical breakdown of the answers to the question “Tell me whether you think Russia has played a mostly positive role or a mostly negative role in the crisis in Ukraine. Percent ‘mostly positive’”. The entire country was broken down into 6 regions there, which included not only the regions that had voted against Yanukovych in 2010 (such as the May 25th election had excluded) but also the two regions that had voted the most heavily for Yanukovych, Donbass (which had voted over 90% for him, and which here constituted the eastern half of the region called “East,” which entire region was shown as having rated Russia’s “role in the crisis in Ukraine” 35.7% as having been “mostly positive”), and also Crimea (which constituted the entirety of one of those 6 regions, and which had voted around 75% for Yanukovych, and which answered 71.3% that Russia’s “role” had been “mostly positive”). The only other region where Russia’s “role” had been rated as “mostly positive” by more than 3% was the area around Odessa, called here “South,” where 28.4% of the people rated it “mostly positive.”

All three of the other regions of the pre-coup Ukraine were the regions where the Presidential election had been held on May 25th of 2014: these were the regions Gallup categorized as Center (2.4% “mostly positive”), North (1.8% “mostly positive”), and West (1% “mostly positive”). So, Poroshenko had been elected as the President for all of Ukraine, but by  only voters in the most anti-Russian half  of that extremely divided country; and now the residents of two of the other areas (areas in the strongly pro-Yanukovych half of Ukraine) had tried to separate from Ukraine and to join again with Russia (of which those regions had long been parts): Crimea, and Donbass. Crimea was accepted by Putin into Russia, but Donbass was not.

U.S. President Obama imposed the economic sanctions against Russia for Russia’s having accepted the pleas of Crimeans to rejoin Russia, and for Russia’s opposition to the Obama-imposed government’s ethnic-cleansing program to exterminate and/or expell from Ukraine the residents of the Donbass region of Ukraine. The same European Union that accepted Obama’s bloody February 2014 Ukrainian couphave also been accepting his ethnic-cleansing campaign there; and Obama insists upon its being ultimately continued, notwithstanding his Secretary of State, John Kerry’s, internal opposition to it.

Investigative historian Eric Zuesse is the author, most recently, of  They’re Not Even Close: The Democratic vs. Republican Economic Records, 1910-2010, and of  CHRIST’S VENTRILOQUISTS: The Event that Created Christianity.

By John W Lillpop Those among us who genuinely love America and American values have struggled mightily to weather Barack...