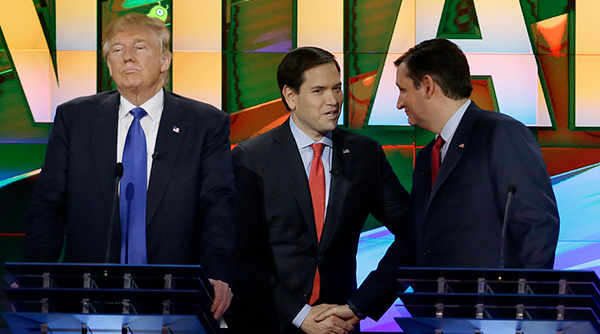 The Republican debate that took place last night in Houston, Texas, was phenomenally good for America and freedom lovers everywhere.  Ahead of Super Tuesday, arguably the most important day in the GOP primaries that takes place on March 1st, Ted Cruz and Marco Rubio teamed up to expose Donald Trump’s leftist views and reveal Trump to be a huge liar.  Trump, a known leftist Democrat, is running as a conservative and has been hijacking the Republican nominating process.  Rubio finally realized that he needed to take down Trump and together with Cruz, they did exactly that.  This beat down was so fierce, that Wolf Blitzer had to come to Trump’s rescue on several occasions in order to preserve the media’s chosen candidate to go up against Hillary in November.  The media knows that Trump loses to Hillary in a landslide and they are doing all they can to protect him.

It was a beautiful sight to see conservatives expose the traitor in their midst.  Only the truly delusional and hardcore Trump supporters will not realize that Trump has not changed his ways and is still a Democrat.

Ted Cruz prosecuted Trump as if he was already on the witness stand for financial fraud.  Cruz revealed lie after lie that the Donald has been spewing.

Here is just one outright lie of many from Trump on health care:

Cruz and Rubio exposed so many of Trump’s true leftist positions and lies, that it is hard to list them all.  The audience now knows that Trump is anti-Israel, supports socialized health care, supports Planned Parenthood, supported invading Libya, and supports amnesty.

Trump is a big supporter of amnesty.  He has employed many illegal aliens, advocates for illegal aliens to be deported and then come back to become citizens, and supported amnesty while Ted Cruz was fighting the Gang of 8 in the Senate:

Congress must protect our borders first. Amnesty should be done only if the border is secure and illegal immigration has stopped.

After this debate, it should be obvious to any reasonable observer that Trump shouts “liar” because he cannot defend his abysmal record and that Trump is no conservative.

“During the holiday season of 2014, I was sent a meeting invitation by a prominent Disney executive. With an...