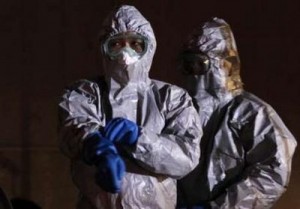 It seems that many who supported the weekend’s air strikes on Syria are overlooking the significance of Robert Fisk’s report yesterday from Douma, the site of a supposed chemical weapons attack last week.

Fisk is the first western journalist to reach the area and speak to people there. One is a senior doctor at the clinic that treated victims of what a video purported to show were chemical weapons used by the Syrian government. The incident was used as the justifcation for the air strikes launched jointly by the US, the UK and France.

The doctor says the video was real, but did not show the effects of a chemical weapons attack. It showed something else. This is what the doctor is reported saying:

“I was with my family in the basement of my home three hundred metres from here on the night but all the doctors know what happened. There was a lot of shelling [by government forces] and aircraft were always over Douma at night — but on this night, there was wind and huge dust clouds began to come into the basements and cellars where people lived. People began to arrive here suffering from hypoxia, oxygen loss. Then someone at the door, a ‘White Helmet’, shouted ‘Gas!”, and a panic began. People started throwing water over each other. Yes, the video was filmed here, it is genuine, but what you see are people suffering from hypoxia – not gas poisoning.”

On my social media pages there are plenty of armchair warriors furiously denying the importance of this report, by claiming either that the doctor made up the story or that Fisk is a mouthpiece for the Assad regime, or maybe both.

That will not wash for reasons that ought to be obvious – and it still won’t wash even if the testimony later turns out to be wrong.

The air strikes on Syria at the weekend were patently illegal according to international law. That would have been the case even had there been a chemical weapons attack in Douma, in part because it would have been necessary for independent inspectors to determine first whether the Syrian government, and not the jihadists there, was responsible.

The air strikes would have been illegal too, even if it could have been shown that a chemical weapons attack had taken place and that Assad personally ordered it. That is because air strikes would have first required authorisation from the UN Security Council. That is why international law exists: to regulate affairs between states, to prevent militarism of the “might is right” variety that nearly destroyed Europe 80 years ago, and to avoid unnecessary state confrontations that in a nuclear age could have dire repercussions.

Had Assad been shown to be responsible, Russia would have come under enormous international pressure to authorise action of some kind against Syria – pressure it would have been extremely hard for it to resist.

But had it resisted that pressure, we would have had to live with its veto at the Security Council. And again, for very good reason. Israel, the US and the UK have used depleted uranium munitions in the Middle East, and Israel and the US white phosphorous. But who among us would think it reasonable for Russia or China to unilaterally carry out punishment air strikes on Ft. Detrick (US), Porton Down (UK) or Nes Ziona (Israel), and justify the move on the grounds that the US and UK could veto any moves against themselves or their allies at the Security Council? Who would want to champion belligerent attacks on these sovereign states as “humanitarian intervention”?

But all of this is irrelevant because whatever incontrovertible information the US, UK and France claimed to have that Syria carried out a chemical weapons attack last week is clearly no more reliable than their claims about an Iraqi WMD programme back in 2002.

Fisk does not need to prove that his account is definitively true – just like a defendant in the dock does not need to prove their innocence. He has to show only that he reported accurately and honestly, and that the testimony he recounted was plausible and consistent with what he saw. Everything about Fisk’s record and about this particular report suggests there should be no doubt on that score.

Fisk’s report shows that there is a highly credible alternative explanation for what happened in Douma – one that needs to be investigated. Which means that an attack on Syria should never have taken place before inspectors were able to investigate and report their findings.

Instead, the US-UK-France launched air strikes hours before the UN inspectors were due to begin their work in Syria, thereby pre-empting it. At the time those air strikes took place, the aggressor states had neither legal nor evidential justification for their actions. They were were simply relying on the reports of parties, like the White Helmets, that have a vested interest in engineering the Syrian government’s downfall.

As is now known beyond doubt, our leaders lied to us about Iraq and about Libya. Some of us have been warning for some time that we should be highly sceptical of everything we are being told by our governments about Syria, until it is verified by independent evidence.

Just consider for a moment the UK’s support for, and involvement in, the horrifying Saudi war against Yemen, or US politicians’ blanket silence on Israel’s massacre of unarmed demonstrators in Gaza. Our leaders have no moral high ground to stand on. Their foreign policy decisions are about oil, defence contracts and geo-strategic interests, not about protecting civilians or fighting just wars.

However bad Assad is, and he is a dictator, he is responsible for far fewer deaths and much less suffering in the Middle East than either George W Bush or Tony Blair.

Former New York Times correspondent Stephen Kinzer sets out a very plausible reason why the US, UK and France keep intervening in Syria. It is not about children or chemical weapons. It is to prevent the Syrian government and Russia triumphing over the jihadists, as they have been close to doing for some time.

These western states are adamantly opposed to allowing a peaceful resolution in Syria, Kinzer observes, because it:

“might allow stability to spread to nearby countries. Today, for the first time in modern history, the governments of Syria, Iraq, Iran and Lebanon are on good terms. A partnership among them could lay the foundation for a new Middle East.

“That new Middle East, however, would not be submissive to the United States-Israel-Saudi Arabia coalition. For that reason, we are determined to prevent it from emerging. Better to keep these countries in misery and conflict, some reason, than to allow them to thrive while they defy the United States. …

“From Washington’s perspective, peace in Syria is the horror scenario. Peace would mean what the United States sees as a ‘win’ for our enemies: Russia, Iran, and the Assad government. We are determined to prevent that, regardless of the human cost.”

Fisk’s account is corroborated by another reporter who is there, Pearson Sharp of the conservative news network One America. Unlike Fisk, who I know has a long track record as a highly credible reporter of events in the Middle East, Sharp is an unknown quantity to me. But it may be significant that he echoes Fisk in saying that no one he spoke to, even in the neighbourhood where the attack supposedly occurred, seemed aware that chemical weapons had been used.

Posted in Freedoms and tagged Syria.