Some day, the bones Barr unearthed about Rice will lead directly back to Obama and his wobbly House of Cards 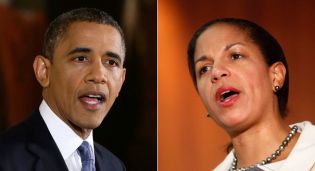 Judicial Watch President Tom Fitton and Fox Business’ Lou Dobbs should cut Attorney General William Barr a break in saying he does not expect an investigation into the origins of the Russia probe will lead to a ‘criminal investigation’  of either former President Barack Obama or former Vice President Joe Biden.

Exposing former UN Ambassador and National Security Advisor ?Susan Rice for the consummate liar that she is, is, in effect, cutting Obama and Biden down at the knees.

Susan Rice not only knows where all the Obama skeletons were buried—she actually buried all the skeletons—including the Trump Inauguration Day memo she wrote to herself.

How is it even possible that Rice knew nothing about an email memo she studiously wrote to herself?

This little gem unearthed by investigative AG Barr will ultimately lead to the downfall of Obama’s FBI-weaponized House of Cards.

Give Barr some time and space to unearth those skeletons leading to the Obama downfall, gentlemen!

Susan Rice was Obama’s liar-in-chief long before she wrote that memo to herself on inauguration day, 2017.

It was a Barr-exposed Rice who provided cover for both Obama and then Secretary of State Hillary Clinton in the Benghazi tragedy—making five televised appearances with rat-a-tat lies that protests and an obscure anti-Muslim video were the cause for American loss of life in the Benghazi boondoggle.

Liars don’t change their pants even when they’re on fire:

“Just weeks ago, Rice in promoting her new book, was lamenting how she was sent out in place of Clinton to cover Benghazi, at the White House’s request: (Canada Free Press, Oct. 29, 2019)

“That was the question then-U.S. Ambassador to the U.N. Susan Rice’s mother asked when she told her she would be appearing on all five Sunday morning political shows on Sept. 16, 2012 — just five days after the terrorist attack on the U.S. consulate in Benghazi, Libya.

“The exchange was detailed in Rice’s new book, “Tough Love: My Story of the Things Worth Fighting For,” as she recalled what led to and what fueled the biggest political controversy of her government career.

As recently as last year Rice came out in a huff all because President Donald Trump did not inform Obama about the coming al-Baghdadi take down.(Canada Free Press, Oct. 29, 2019)

“A three-year-old interview clip of former National Security Adviser Susan Rice resurfaced Tuesday after the declassified email she sent to herself on the final day of the Obama administration was released. (Fox News, May 19, 2020 )

“During an April 2017 appearance on PBS News Hour, Rice was asked about the then-breaking revelations about members of President Trump’s transition team having been surveilled before he took office.

“In the last few hours, we’ve been following a disclosure by the chairman of the House Intelligence Committee, Devin Nunes, that in essence, during the final days of the Obama administration, during the transition after President Trump had been elected, that he and the people around him may have been caught up in surveillance of foreign individuals and their identities may have been disclosed. Do you know anything about this?” PBS anchor Judy Woodruff asked.

“I know nothing about this,” Rice said at the time. “I was surprised to see reports from Chairman Nunes on that count today.”
“Rice then pivoted to Trump’s accusation that then-President Barack Obama had “wiretapped” him during the 2016 election, insisting that “nothing of the sort occurred.”

“She later insisted that “no president, no White House can order the surveillance of another American citizen. That can only come from the Justice Department with the approval of a FISA court.”

“However, the newly released email appeared to indicate Rice had knowledge of the surveillance that took place that led to the “unmasking” of then-incoming National Security Adviser (NSA) Michael Flynn from his communications with the then-Russian ambassador.

“The email, which was written on Jan. 20, 2017, documented a Jan. 5 Oval Office meeting with then-President Obama and others, during which he provided guidance on how law enforcement needed to investigate Russian interference in the 2016 presidential race. Parts of it were released previously, but the section on then-FBI Director James Comey’s response had been classified as “TOP SECRET” until now.

“Comey suggested to Obama that the National Security Council (NSC) might not want to pass “sensitive information related to Russia” to Flynn, according to a newly declassified email that Flynn’s predecessor sent herself on Inauguration Day.

“The section showed that Comey affirmed to Obama he was proceeding “by the book,” and went on to discuss concerns about Flynn’s known conversations with Russia’s ambassador at the time—conversations that would play a role later in the criminal case against Flynn.

“Rice continued in her email: “From a national security perspective, Comey said he does have some concerns that incoming NSA Flynn is speaking frequently with Russian Ambassador [Sergey] Kislyak. Comey said that could be an issue as it relates to sharing sensitive information. President Obama asked if Comey was saying that the NSC should not pass sensitive information related to Russia to Flynn.”

“Rice then wrote: “Comey replied, ‘potentially.’ He added that he has no indication thus far that Flynn has passed classified information to Kislyak, but he noted that ‘the level of communication is unusual.’”

“In a statement Tuesday evening about the email’s release, a representative for Rice stressed that “no discussion of law enforcement matters or investigations took place, despite accusations to the contrary.” The spokeswoman also insisted the Obama administration did not change the way it briefed Flynn, saying Rice briefed Flynn for more than 12 hours on four separate occasions during the transition.

“Ambassador Rice did not alter the way she briefed Michael Flynn on Russia as a result of Director Comey’s response,” representative Erin Pelton said.

Meanwhile, until Barr went out on his digging-up-skeletons tour, all lies told by Rice had been conveniently buried.

Some day, the bones Barr unearthed about Rice will lead directly back to Obama and his wobbly House of Cards.

In Case You Missed It:  LA County Sheriff Villanueva Asks CA AG to Open Investigation Into Supervisor Sheila Kuehl Being Tipped Off that Search Warrant Was Going to be Served at Her Home
Posted in Tyranny and tagged Crime, Obama, Obamagate, Spygate.

By Janice Shaw Crouse Well informed citizens have been rocked by revelations from recently unclassified documents that clearly show that President Obama "was...