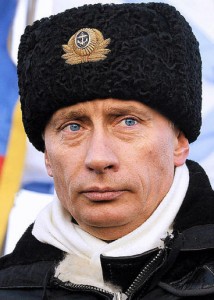 Suspicions were growing last night that Russian security services were behind the leaking of the notorious British ‘Climategate’ emails which threaten to undermine tomorrow’s Copenhagen global warming summit.

An investigation by The Mail on Sunday has discovered that the explosive hacked emails from the University of East Anglia were leaked via a small web server in the formerly closed city of Tomsk in Siberia.

The leaks scandal has left the scientific community in disarray after claims that key climate change data was manipulated in the run-up to the climate change summit of world leaders.

The row erupted when hundreds of messages between scientists at the university’s Climatic Research Unit (CRU) and their colleagues around the world were placed on the internet along with other documents.

The CRU is internationally recognized as one of the most important sources of information on the rise in global temperatures.

Its data is relied on by the Intergovernmental Panel on Climate Change, the UN body which co-ordinates the world response to climate change.

But now the CRU’s findings are under suspicion.

The leaked emails appear to show that CRU director Professor Phil Jones and colleagues attempted to manipulate the figures and hide their raw data from researchers with opposing views.

Prof Jones has stepped aside from his post while claims are investigated that he wanted certain papers excluded from the United Nations’ next major assessment of climate science.

Russia – one of the world’s largest producers and users of oil and gas – has a vested interest in opposing sweeping new agreements to cut emissions, which will be discussed by world leaders in Copenhagen tomorrow.

Russia believes current rules are stacked against it, and has threatened to pull the plug on Copenhagen without concessions to Kremlin concerns.

The Mail on Sunday understands that the hundreds of hacked emails were released to the world via a tiny internet server in a red brick building in a snow-clad street in Tomsk.

The original internet link was quickly removed after the information spread from it like wildfire on to international websites.

A message written in English accompanied the leaked package of emails. It read: ‘We feel that climate science is too important to be kept under wraps.

‘We hereby release a random selection of correspondence, code and documents. Hopefully it will give some insight into the science and the people behind it.’

Climate-change skeptics in the West seized on the emails as evidence that the books were being cooked by the global-warming lobby.

Stories highlighting the ‘scandal’ began to appear from November 21, three or four days after the information was first released on to the server. Some of the leaked emails date back to March, 1996.

Tomcity – the server – and Tomline, its parent company, were unavailable for comment yesterday.

The firm offers an internet security business to prevent hacking and bugs and the ‘compromising of confidential information’.

Other divisions of the firm are involved in laying the cable which provides high-speed internet access to companies in the Siberian city.

The server is believed to be used mainly by Tomsk State University, one of the leading academic institutions in Russia, and other scientific institutes.

Computer hackers in Tomsk have been used in the past by the Russian secret service (FSB) to shut websites which promote views disliked by Moscow.

Such arrangements provide the Russian government with plausible deniability while using so-called ‘hacker patriots’ to shut down websites.

In 2002, Tomsk students were said to have launched a ‘denial of service’ attack at the Kavkaz-Tsentr portal, a site whose reports about Chechnya angered Russian officials.

The FSB office in Tomsk put out a special Press release saying that what the students had done was a legitimate ‘expression of their position as citizens, one worthy of respect’.

A Russian hacking specialist said last night: ‘There is no hard evidence that the hacking was done from Tomsk, though it might have been.

‘There has been speculation the hackers were Russian. It appears to have been a sophisticated and well-run operation, that had a political motive given the timing in relation to Copenhagen.’

And gazeta.ru news website, having received information about the Tomsk server connection, said: ‘Presumably it was Russian hackers who broke into the servers of the university.’

The university said that there was strict security on its server, heightening the theory that an extremely sophisticated hacking operation was carried out to obtain it.

East Anglia University has gone out of its way to promote itself to students from the former Soviet Union. Its website says that 33 Russian students currently study there.

It is not known if they have fallen under suspicion as part of the police investigation.
Tomsk – 2,190 miles east of Moscow – was closed to foreigners during the Soviet era.

Its population of 630,000 includes the secret satellite city of Seversk, formerly known as Tomsk-7 and seven miles to the north, which houses strategic uranium and plutonium plants and remains shut to Westerners.

It was built in the Fifties by 20,000 prisoners from nearby Siberian labour camps.

Today, the city, and especially Seversk, remains closely monitored by the FSB, the successor security service to the Soviet-era KGB.

The city’s academic quarter – some of which uses the server that revealed the climate-change scandal – includes a leading world expert on the subject, Professor Sergei Kirpotin, a botanist of Tomsk University.

He was unavailable yesterday and has not commented on the email controversy.

Previously, in research with academic Judith Marquand from Oxford University, he warned of the risk of the release of billions of tons of methane gas because of the melting of the Siberian peat bogs, seen as being due to global warming.

Kirpotin described the situation as ‘an ecological landslide that is probably irreversible and is undoubtedly connected to climatic warming’.

Russia is the world’s third-largest emitter of greenhouse gases, and lags behind many Western countries in greening its industry.

However, its emissions plunged in the Nineties as its economy collapsed and it now sits on a treasure trove of unused carbon emission permits that could be sold to other countries.

These are due to expire in 2012 with the Kyoto Treaty. The Kremlin wants these to be rolled forward and last week signalled they would not sign a new deal without this, threatening the whole Copenhagen summit.

The crisis caused by the Climategate email row has resulted in the UK’s Met Office being forced to re-examine 160 years’ of climate data after admitting that public confidence in the science on man-made warming had been undermined by the leaks.

A new three-year analysis of the data will mean the Met Office – which works closely with Prof Jones’s unit – will not be able to declare with complete confidence the extent of global warming trends until the end of 2012.

The Norwich-based university has called in Sir Muir Russell, a former senior civil servant, to investigate the row, which is also the subject of a separate probe by the Information Commissioner’s Office.

Last night, news of the Kremlin connection coincided with Norfolk Police confirming to The Mail on Sunday that it was now ‘investigating criminal offences’ in relation to the data breach.

Norfolk police sources said they were working with ‘other agencies’ on the inquiry. But they were unable to say if these included the British security services MI5 and MI6.

This newspaper has established, however, that Scotland Yard computer experts from its Central e-Crime unit are helping Norfolk officers track down the hacker responsible for the leaks.

A Norfolk Police spokeswoman said last night: ‘Norfolk Constabulary can confirm that it is investigating criminal offences in relation to a data breach at the University of East Anglia (UEA).’

The Mail on Sunday tracked down Professor Ross McKitrick, a world-renowned expert on the economic effects of climate change, who said Prof Jones had tried to stop his findings being published in an influential UN report.

Prof McKitrick concluded that Jones and his colleagues at the CRU had overstated the effects of greenhouse gas emissions on global temperatures by failing to take account of external factors linked to population growth and urbanisation.

The attempt to silence McKitrick was revealed in an email from Jones to a US colleague in 2004, when the UN was preparing for a major report by the IPCC.

After describing McKitrick’s findings as ‘garbage’ and dismissing another researcher’s work as inaccurate, Prof Jones wrote: ‘I can’t see either of these papers being in the next IPCC report. Kevin and I will keep them out somehow – even if we have to redefine what the peer-review literature is! Cheers, Phil.’

‘Kevin’ is understood to refer to Dr Kevin Trenberth, a Jones ally and climate analyst at the National Centre for Atmospheric Research in Boulder, Colorado.

A spokesman for the University of East Anglia said last night: ‘A police inquiry is under way.’

In Case You Missed It:  How one brave nurse exposed the gender mutilation of children taking place at Tavistock
Posted in Freedoms and tagged Global Warming.