By Daniel Greenfield:   The UNRWA is on the front lines of the Hamas War in Gaza. In the headlines, its schools are forever being fired on or found to be stockpiling rockets. If individual Gazans are being used as human shields, the UNRWA often seems as if it is one big organizational human shield. 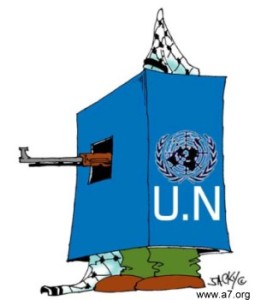 But the UNRWA isn’t Hamas’ human shield. The UNRWA is Hamas.

The “UN” part of the UNRWA, the blue logos and symbols, fool us into thinking of it as an international humanitarian organization. But the UNRWA in Gaza functions as a large Palestinian Arab organization with a smattering of foreign supervisory staff.

And those foreign staffers often tend to leave during a conflict.

The UNRWA is not an international organization operating in the Middle East. Effectively it’s a local Arab Muslim organization funded and regulated internationally. Since the UNRWA classifies 80% of Gazans as “refugees”, it administers the biggest welfare state in the world on their behalf.

The UNRWA is the biggest employer in the West Bank and Gaza after the Palestinian Authority and the vast majority of its employees are “locally recruited”. Varying figures place the share of local employees at between 90 and 99 percent.

Why does Hamas, which is obsessed with brainwashing the next generation into martyrdom, allow a foreign organization to run an educational system for 232,000 pupils?

It’s because in Gaza, Hamas and the UNRWA are the same thing.

The UNRWA’s Gaza staff has its own union. In the 2012 election, a pro-Hamas bloc won the support of most of the union with 25 out of 27 seats on a union board.

When there was talk of reforming the UNRWA by removing Hamas members from its ranks, the editor of a Hamas paper wrote that, “Laying off the agency employees because of their political affiliation means laying off all the employees of the aid agency, because…they are all members of the ‘resistance,’ in its various forms.”

The official word from Hamas was that it and the UNRWA are the same thing. The UNRWA’s vast majority of locally sourced Gazans are part of Hamas.

The UNRWA does not see that as a problem.

“I am sure that there are Hamas members on the UNRWA payroll,” a former UNRWA Commissioner General said, “and I don’t see that as a crime.”

“Hamas as a political organization does not mean that every member is a militant, and we do not do political vetting and exclude people from one persuasion as against another,” he added.

Also if the UNRWA fired Hamas members from its Gaza staff, it would have no one left.

Hamas control over the UNRWA in Gaza is reflected in the schools which promote Islamic terrorism. UNRWA schools have become flashpoints in conflicts between Israel and Hamas because the UNRWA schools are Hamas bases of recruitment and operation.

The current accusations and counter-accusations over attacks on and from UNRWA schools are a reenactment of the same set of events taking place in 2009. Only the locations and the names have changed. The same headlines, “Israeli shelling kills dozens at UN school in Gaza,” and “Massacre of Innocents as UN school is shelled” are repeating all over again.

Then, as now, Hamas launched attacks on Israeli forces from around a UNRWA school. Then it turned out that the attack had happened outside the school andno one had actually died inside the school. Nothing has changed since then. The “massacres” in which Hamas terrorists using UNRWA schools as a base are killed pop up in every paper. The UNRWA repeats the same lies.

Then it “discovers” Hamas rockets in three of its schools. And that’s just the tip of the iceberg because every UNRWA school is a Hamas school.

The UNRWA has admitted that Hamas uses its schools to store rockets. It admits that it has Hamas members in its ranks. It admits that rockets havebeen fired “into Israel from the vicinity of UN facilities and residential areas.”

What it refuses to admit is that it should in any way be held accountable for functioning as an arm of a terrorist organization.

If an organization consists largely of Hamas members who use it pursue Hamas goals, then the organization is Hamas.

The UNRWA is Hamas.

Hamas use of the UNRWA as its public face is a war crime, but terrorists commit war crimes without a second thought. The UN and the UNRWA however are complicit in the war crime by allowing Hamas to go on exploiting the UN brand.

Hamas is listed as a Foreign Terrorist Organization. It’s against the law for the United States to fund it. By funding the UNRWA, the United States is paying Hamas and participating in its war crimes. Using civilian and humanitarian facilities for military purposes is a war crime. Using them to stage attacks against civilians by attackers out of uniform adds further crimes to the total.

The United States provided $130 million to the UNRWA in 2013. The UNRWA’s operations in Gaza would not be viable without that money.

When Kerry visited Gaza in 2009, the UNRWA’s Gaza chief passed along a letter to him from Hamas. The incident showed that not only was the locally recruited staff working for Hamas, but the UNRWA leadership was clearly cooperating with the terrorist group.

The original “refugees” that the UNRWA was set up to cater to are for the most part dead. The UNRWA has become another UN boondoggle funding a welfare state for “refugee camps” that are older, bigger and more developed than many Middle Eastern cities.

UNRWA staff act as terrorists when they use UNRWA facilities for military purposes, but then switch back to UNRWA when Israel fights back. Hamas carries out attacks. The UNRWA demands ceasefires. Hamas uses UNRWA schools and the UNRWA denounces Israel when an attack happens.

The UNRWA has become the mask that Hamas wears.

This issue has come up before and the UNRWA’s long record of evasions and denials, admitting the substance of the claims about the Hamas takeover of the UNRWA, while insisting that its Hamas members are neutral and that all the rocket stores and rocket attacks around UNRWA facilities are unrelated to the Hamas members on its staff, are not good enough anymore.

The United States should not be in the business of funding the corruption of young minds. Money should not be taken from American schools to fund the spread of hatred and terrorism.

It’s time to defund the UNRWA.

In Case You Missed It:  Freedom of Speech, Just an Illusion?
Posted in Terrorism and tagged Hamas, Islam, Jihad, terror, United Nations.

What if Gaza were San Diego instead?

TO UNDERSTAND why Israel fights in the Gaza Strip, try this thought experiment: Imagine that Mexicans loudly and violently demand...