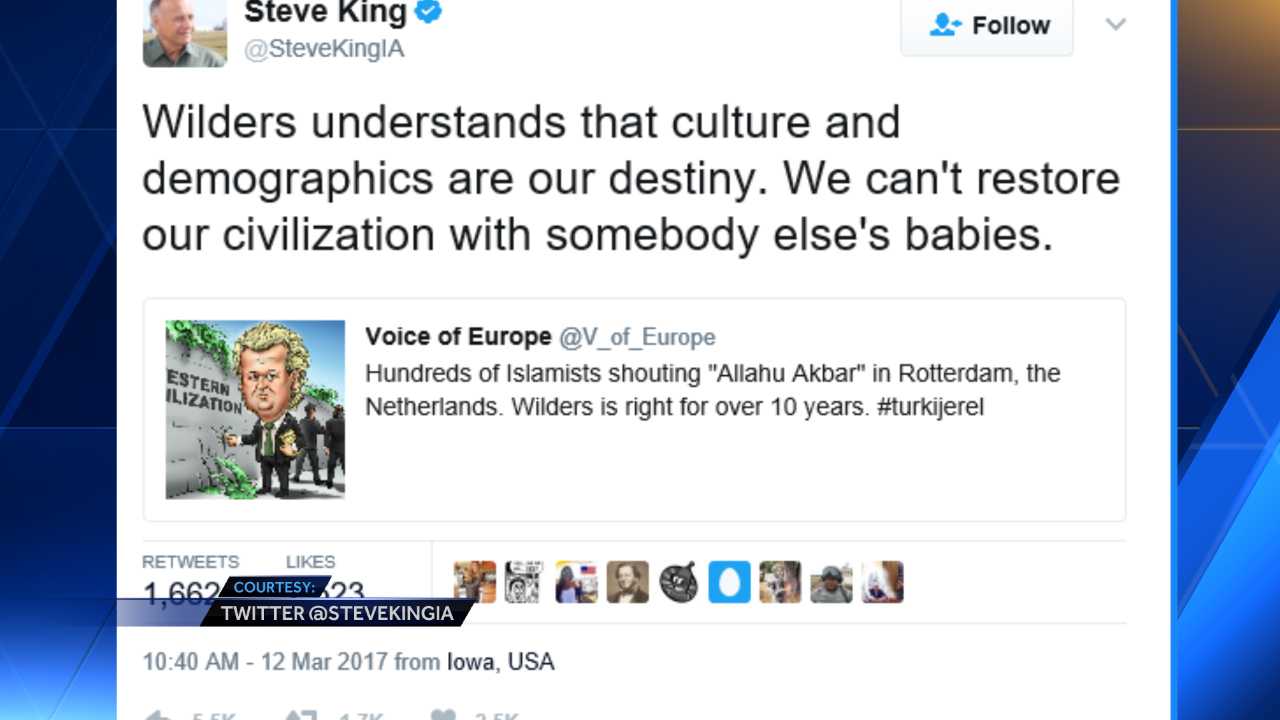 Rep. Steve King said Monday that he wasn’t making a statement about race but rather about immigration and culture when he posted a  tweet saying the U.S. “can’t restore our civilization with somebody else’s babies.”

USA has never been a Multicultural nation, Multiculturalism is the promotion of Multi or “Many” cultures. This goes against the basic premise of US policy for the past 200 plus years, the latin motto E pluribus unum, or of many one.  Clearly USA has promoted one culture, that being American.  No matter where you come from, you become one… American.

Multiculturalism goes against the very grain of E pluribus unum, rather than promoting one people the American people, the modern day leftist are promoting many cultures divided within on country. History has show us two or more cultures never get along and conflict arises, never in history has Multiculturalism led to peace, rather it is divisive and leads to conflict.

The advances of Western civilization have far exceeded all others from all other times. This began with, and continues by, the influence of Christianity, (and that is in spite of all of its faults and foibles perpetrated by individuals and mis-interpretations and mis-applications of the Truth tenets of Christianity), in the west. It transformed barbaric war mongering and brutality of the Roman Empire, into a reasonable and rational society of cultural advancers and developers; in short, thinkers and leaders.

Hospitals, medicine, engineering, technology, and many other disciplines not mentioned here, have been born and spread from the west. This is evidence of God’s blessing on people whose by and large application and prioritization of better living principles, (NOT of better individuals), has significantly raised the entire standard of order and needs meeting in said cultures; not remaining backwards.

The West has given the world the symphony and the novel. Western Civilization also produced  Purcell, Bach, Beethoven, Mozart, Leonardo Da Vinci, Vermeer, Shakespeare, Goethe, Moliere, Jane Austen, Newton, Wren, Darwin, Einstein, Watson & Crick, Magna Carta, the US Constitution, and so much other good stuff that to list it all would be the work of days.

Bach is a better composer than all the composers of all the non-European cultures there have ever been. There are lots of historical and cultural reasons why the West has the advantage here: more widespread literacy; early adoption of the printing press; the fact that, unlike some cultures we could name, it doesn’t try to ban music as haram…. But the fact that remains that what is is.

Combines the wisdom of the ancients, with Judaeo-Christian morality, filtered through the empiricism of the Enlightenment. Fundamental values include: property rights; religious tolerance; habeas corpus; universal suffrage;

equality under the law; love thy neighbour as thyself; free-ish markets.

All worthwhile human endeavors, innovations, and achievements have come from the west at least for the last several hundred years came from the west, that is why the 3rd wold is immigrating to the west in huge numbers, to enjoy the fruits of Western Civilization, while the left portrays the West as the villain, when it reality it has improved the world and the lives of billions.

Life, liberty, and the pursuit of happiness: this triptych succinctly defines the attractiveness and superiority of Western civilization. In the West we are free to think what we want, to read what we want, to practice our religion, to live as we choose.  Liberty is codified in human rights, a magnificent Western creation but also, I believe, a universal good.  Human Rights transcend local or ethnocentric values, conferring equal dignity and value on all humanity, regardless of sex, ethnicity, sexual preference, or religion. At the same time, it is in the West that human rights are most respected.

It is the West that has liberated women, racial minorities, religious minorities, and gays and lesbians, recognizing their rights. The notions of freedom and human rights were present at the dawn of Western civilization, as ideals at least, but have gradually come to fruition through supreme acts of self-criticism.  Because of its exceptional capacity for self-criticism, the West took the initiative in abolishing slavery; the calls for abolition did not resonate even in black Africa, where rival African tribes took black prisoners to be sold as slaves in the West.

To replace Western Culture is to decline back to the days before Human rights. Westerners in Europe, Australia and North America must realize before it too late that Western Civilization is the prime example of a civilized civilization. Westerners have brought up the world, medicine, computers, GPS, automobiles, jetliners and electricity to name a few.  If anything the world should grasp the concept and we could share our innovative culture to the world and help them also succeed, vs wash out our culture with Multiculturalism and less innovative cultures.  Many non-Western countries have adopted many aspects of Western Civilization and it has brought up their societies tremendously.

Perhaps it is “racist” as the left would say to not help these 3rd would countries excel and benefit like the west has, instead of importing in Multiculturalism why do we realize we have one of the best systems and it time to help them become more like us.  We cannot take in the whole world inside our borders, without a negative effect on our own societies and a literal washing out of our culture.

Many non-Western cultures follow customs and practices that are clear violations of the Universal Declaration of Human Rights (1948).  In many countries, especially Islamic ones, you are not free to read what you want.  Under sharia, or Islamic law, women are not free to marry whom they wish, and their rights of inheritance are circumscribed.  Sharia, derived from the Koran and the practice and sayings of Muhammad, prescribes barbaric punishments such as stoning to death for adultery.  It calls for homosexuals and apostates to be executed.  In Saudi Arabia, among other countries, Muslims are not free to convert to Christianity, and Christians are not free to practice their faith.  The Koran is not a rights-respecting document.

Between 80 and 90 percent of those coming are from Third World nations on average have higher illegitimacy rates than native-born Americans, higher drug use rates, higher rates of obesity, spousal abuse and child abuse, higher rates of disease, lower test scores and higher dropout rates, and higher crime and incarceration rates.

Children of immigrants are more gang-oriented. And Third World immigrants consume more per capita in social services than they pay in taxes. Hence they contribute to fiscal deficits at every level of government. Racial, ethic and religious hatreds pull people apart and create terrorists all over our disintegrating world, why would we want to make ourselves ever more diverse? History has shown us time and time again, ethnically diverse societies are a source of instability.

Will millions more immigrants to the West make the world a better place?

The whole left-wing moral vocabulary is a rejection of Western moral standards: “tolerance,” “inclusion,” “anti-discrimination” (by definition, standards discriminate), “non-judgmental,” and even “income inequality,” which deems some peoples’ work more valuable than others.

The Left, along with the rest of us, will soon realize that it’s a lot easier to destroy a functioning, humane civilization like the west, than to build one.

The borders opened wide is forced “diversity” and forced “multiculturalism” is intended to turn Westerners into the minority, that’s genocide. If you don’t believe its genocide look at what the leftist have said about Tibet.

Millions of Chinese flooding into Tibet? With their displacement of the native peoples and the supplanting of Tibetan with Chinese culture, leftist and human rights activists have labeled the colonization “cultural genocide.” (See here,here, here, here, and here, for example.) It is a cause célèbre with its own popular bumper sticker. This situation

corresponds precisely to what’s happening in most Western countries—most notably the United States—except for one minor detail: No compassionate liberal activists call it cultural and demographic genocide.