The Truth About Islam: Jihad

By Dr. David R. Reagan– From its inception, Islam has been committed to what it calls jihad — a word meaning holy war. The duty of Muslims is to subjugate or destroy “infidels” — the term the Koran uses for all non-believers. In the Muslim viewpoint, the world is divided into two regions — those […]

PORTLAND, Ore. – Federal agents in a sting operation arrested a Somali-born Muslim teenager just as he tried blowing up a van he believed was loaded with explosives at a crowded Christmas tree lighting ceremony in Portland, authorities said. The bomb was an elaborate fake supplied by the agents and the public was never in […]

Muslim Hajjis Cry ‘Death to America! and ‘Death to Israel!’ at Annual Pilgrimage

Tens of thousands of Muslims chanted “Death to America” and “Death to Israel” at the annual Hajj pilgrimage, which the Ayatollah of Iran called “a symbol of spirituality.” The Arab Ahlul Bayt News Agency reported, “The pilgrims chanted anti-US and anti-Zionist slogans during the ceremony, also attended by the Supreme Leader’s representative for Hajj affairs, […] 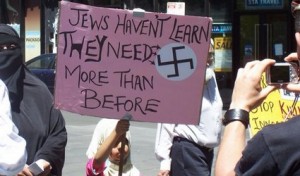 We’re Entering Another Very Dark Period for Jews in Europe

WASHINGTON – The Islamic terror group tied to the Ft. Hood killings and the Christmas Day undies airbomber urge American Islamic jihadis to open fire on crowded restaurants in the nation’s capital to massacre U.S. government workers. The advice appears in “Inspire,” the latest issue of a slick Islamic propaganda publication by Al Qaeda in […]

I am a Traitor to America Because My Religion Requires Me

‘I am proud to be a traitor to America’: U.S. citizen mocks his homeland in ‘Al Qaeda magazine‘. An American citizen has written about his pride at leaving the U.S. and joining Al Qaeda in Yemen. In Inspire – an English-language magazine produced by Al Qaeda supporters on the Arabian Peninsula – Samir Khan mocks […]

The common traits of amongst many prophets are desires of having power over their disciples, abusing those powers to their advantages and using those powers to have a lot of sex with different partners. American prophets Mitchell, Koresh and Jones were no different and shared these prophetic traits with Islamic Prophet Muhammad. FALSE PROPHET DAVID […]

A pro-family organization says it’s hypocritical for high-ranking officials in the Government to condemn a Florida church’s plans to burn Qu’rans when Muslims groups have burned Bibles on numerous occasions. Father Musalam a Christian in Priest in Gaza pleaded to the world in 2007 that the Muslim gunmen used rocket-propelled grenades (RPGs) to blow through […]

By: Ronald Kessler Unlike most politicians, President Obama is an ideologue who sees his presidency as a way to extend government control over Americans’ lives, Ed Gillespie, former counselor to President George W. Bush, tells Newsmax. “I believe that he and the people around him see this as an opportunity to seize control of one […]